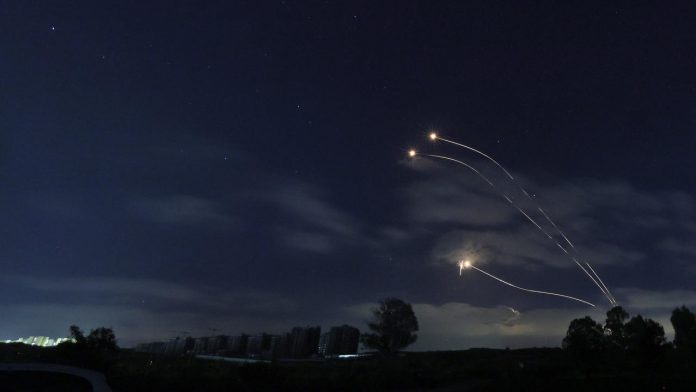 Three missiles were launched from Lebanon to northern Israel on Thursday, but landed in the Mediterranean Sea, with no damage or casualties, the Israeli army said. Missile firing threatened to open a new front in the escalating fighting between Israel and the militant Palestinian Hamas group in Gaza.

Israeli Defense Forces (IDF) confirmed in a Twitter message that three missiles were fired from Lebanon into the Mediterranean Sea off the coast of northern Israel.

BREAKING: A while ago, three missiles were fired from Lebanon into the Mediterranean Sea off the coast of northern Israel.

The IDF did not provide details of who fired them. But two sources close to Israel’s nemesis Hezbollah told the AFP that the Lebanese Shia group had no link to the incident.

“Recently, three missiles were fired from Lebanon into the Mediterranean Sea off the coast of Galilee,” the Israeli army said in a statement. “According to protocol, no sirens sounded.”

There was no immediate comment from Beirut on the incident.

Israel waged a war in 2006 against Hezbollah guerrillas, who control southern Lebanon and advanced missiles. The border has been largely silent since then.

Small Palestinian factions in Lebanon have sporadically fired at Israel in the past.

A witness in the northern Israeli port city of Haifa said she heard three explosions shortly before the missile burst was reported.

No sirens were warned for the launch, something the military said was “according to protocol” – an allusion to Israeli air defenses ignoring missiles set to hit uninhabited areas.

The missiles from Lebanon came amid an escalation in fighting between Israel and Hamas, despite international calls from both sides to scale back the conflict. Earlier Thursday, Hamas fired a barrage of missiles at Israel. Hours later, Israel hit Gaza with artillery and tank grenades, forcing families to flee their homes, Palestinian witnesses said. The use of artillery fire in Israel’s four-day-old offensive increased the risk of civilian casualties.

Israel rallied thousands of troops along the Gaza border and reservists were called up when IDF officials said all options were on the table, including a ground offensive in the beleaguered Palestinian enclave.

The developments came when an Egyptian delegation arrived in Tel Aviv for talks with Israeli officials as part of efforts to negotiate a ceasefire, Egyptian intelligence officials said.

Gaza’s Ministry of Health said the death toll has risen to 83 Palestinians, including 17 children and seven women, with more than 480 injured since the fighting broke out on Monday. Seven Israelis were killed in the attacks, including a soldier.

Netanyahu: ‘We will achieve our goal’

Israeli Prime Minister Benjamin Netanyahu on Thursday visited batteries of the Iron Dome missile defense system, which the military says has intercepted 90 percent of the 1,200 missiles that have reached Israel from Gaza so far.

“It will take more time, but with great determination … we will achieve our goal – to restore peace to the State of Israel,” he said.

The previous evening, Israeli TV reported that Netanyahu’s Security Cabinet had authorized an extension of the offensive that the military said has already hit 600 targets in Gaza.

The current outbreak of violence began a month ago in Jerusalem, where the threat of eviction of dozens of Palestinian families by Jewish settlers sparked protests and clashes with police. A focal point of clashes between Palestinians and Israeli police was Jerusalem’s al-Aqsa Mosque, built on a hilltop revered by Jews and Muslims.