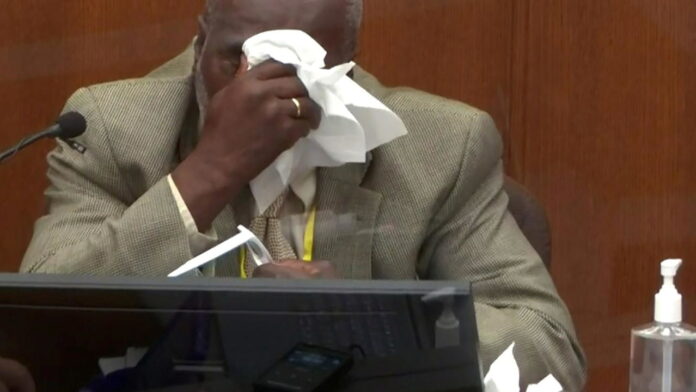 Cooling police footage was shown to the jury on Wednesday at the trial of the white police accused of killing George Floyd, a 46-year-old black man whose death involved anti-racism protests around the world.

The video taken by the body cameras of the four police officers involved in Floyd’s arrest on May 25, 2020, was introduced by prosecutors on the third day of the trial of former Minneapolis police officer Derek Chauvin.

Chauvin, 45, who was caught on video kneeling on the neck of a handcuffed Floyd for more than nine minutes, is charged with murder and manslaughter.

The bodycam footage includes the moment Floyd was arrested under arms for allegedly sending a fake $ 20 bill and his desperate grounds that he “cannot breathe” when pinned to the street by officers.

Lane’s film camera shows Floyd saying “Please do not shoot me” as he is pulled out of his car outside the store where he paid for a pack of cigarettes with a counterfeit 20 USD banknote.

Floyd is handcuffed and taken to a group car where he becomes increasingly distressed and fights with the officers who try to put him behind the vehicle.

“I’m claustrophobic, man,” Floyd says repeatedly. “Why are you making me like this? Do not make me like this man. ”

After Floyd falls out of the car on the street, three officers push him with Chauvin kneeling on his neck.

Chauvin’s body camera was knocked off in the fight and falls under the car, but the other officers’ cameras continued to operate.

Floyd repeatedly says he can not breathe. “Mom, I love you,” he says. “My stomach hurts, I hurt my neck.”

At one point, one of the officers says “I think he’s gone out” and asks if they should “roll him on his side.”

The film body film continues until an ambulance arrives and takes an unconscious Floyd to hospital, where he was pronounced dead.

In addition to the body camera video, court hearings on Wednesday included the emotional testimony of a store manager who said he regretted accepting Floyd’s fake $ 20 bill.

“If I had just not taken the bill, this could have been avoided,” says Christopher Martin, treasurer at Cup Foods.

Martin, 19, said he immediately knew the banknote was counterfeit but took it anyway.

“I thought George did not really know it was a fake bill,” Martin said. “I thought I would do him a favor.”

“I planned to just put it on my tab,” he said, meaning the amount would be taken out of the paycheck. “I offered to pay for it.”

However, Martin said he told the store manager about the fake invoice, and the manager eventually called the police.

Martin said Floyd appeared to be under the influence of drugs or alcohol while in the store but was “very friendly, approachable, talkative.”

“He seemed to have an average memorial day, just living his life,” Martin said. “He seemed tall.”

Eric Nelson, Chauvin’s defense attorney, argued in the initial argument that Floyd’s death was due to drugs and underlying medical conditions and not suffocation.

Martin said he left the store again when he heard “screaming and screaming” outside.

“I saw (Chauvin) with his knee on George’s neck on the ground,” he said. “George was immobile, limp.”

When asked by prosecutor Matthew Frank what he felt at the time, Martin was visibly upset and said “mistrust and guilt.”

Also witnessing on Wednesday was Charles McMillian, 61, who said he drove that day and stopped to see what happened.

McMillian, the first spectator on stage, can be heard on video at one point and tells the struggling Floyd “you can not win” and getting into the back of the police car.

McMillian began sobbing as the police body camera video of Floyd’s arrest was played, removing his glasses and wiping his eyes with tissues until Judge Peter Cahill called a brief recess.

McMillian also confronted Chauvin after the incident. Asked by a prosecutor why he did it, McMillian said, “Because what I saw was wrong.”

Chauvin, a 19-year-old veteran of the police force, faces up to 40 years in prison if convicted of the most serious charge – second-degree murder.

His trial is expected to last about a month.