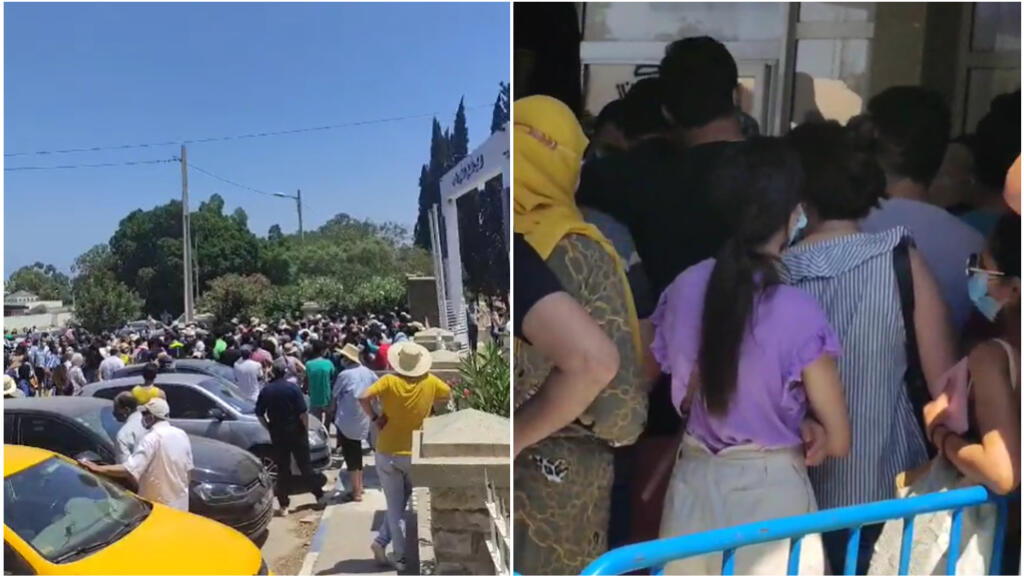 Against the backdrop of a deteriorating Covid-19 health situation in Tunisia, the government launched a comprehensive vaccination campaign on Tuesday, July 20, as the country marked Eid al-Adha. Long lines formed at vaccination centers during the day, causing tension and even violence in some cities. The initiative, which was to continue the next day, was therefore shelved.

The two ‘open days’ of the Covid vaccine were only announced by the authorities on Monday 19 July. Some local press warned that this would lead to disaster, as 29 vaccination centers had just one day to prepare before welcoming all Tunisians over 18 without an appointment system in place.

On Tuesday morning, July 20, several images were shared online showing the long lines for vaccination centers that were not scheduled to open until 1pm.

One year after the Lekki Toll Gate bloodshed, Nigerians…

‘Organisers had already handed out tickets numbered from 1 to 1,000’

Due to the high demand, some centers quickly became overwhelmed. In Rades, a suburb in southern Tunis, Omar (not their real name) filmed long lines waiting outside the city’s only vaccination center. He arrived at 12:30 p.m. but could not get a ticket to get vaccinated.

We arrived as planned but we were surprised to find that [the organisers] had already numbered tickets from 1 to 1,000 from early in the morning.

We were told there were no vaccines available. It was a bad experience, mainly because of the risk of getting infected [due to the crowds]. I could return at some point to get vaccinated if it is organized with an appointment system.

‘I understand people’s frustration, but it was apocalyptic’

As soon as the center opened, some patients tried to force their way inside. Video footage shot by volunteers at the center shows nurses blocking the main entrance. The door gave way around 3:00 PM. Amina (not their real name), a health professional, volunteered to help with the ride:

I had predicted that due to Eid there would not be enough staff and that we would need reinforcements. Tuesday was a total chaos, the center was supposed to open at 1 pm. But I heard people came around 6 am.

When I arrived it was impossible to get in, there was a crowd, it was rushed. There was no security and only one door. The volunteers were overwhelmed. We called the police, who were also overwhelmed. In the meantime, we tried to continue vaccinating.

When we let people in, we struggled to close the door behind them. It was very difficult to get the vaccinated people out of the center because as soon as we opened the door people rushed in. Some volunteers panicked and had anxiety attacks. In the end the door fell open and we had to close the center around 4 pm, before the vaccinations were finished.

Until now, the vaccinations take place according to age. We’ve reached the over-50s threshold, so people between the ages of 18 and 50 demanded to be vaccinated. This is bad management. I understand people’s frustration, but it was apocalyptic.

In some centers in other parts of the country, the vaccination process went more smoothly, such as in the northeastern city of Ariana, where the president of the regional council of the Tunisian Medical Association, Lamia Kallel, announced the “3,500 doses” “delivered “in six hours” in a Facebook post.

‘The problem was that communication came too late’

The vaccination day was also a success in Nabeul, in the northeast of Tunisia. Mohamed Ameur Stambouli, who is responsible for projects and activities in a local association, volunteered to help organize the vaccination campaign. He believes it was the mobilization of civil society that made it possible to respond to the emergency:

We vaccinated 1,053 people. The center was supposed to open at 1pm, but we started at 8am by handing out numbered tickets and asking people to come back at a specific time to avoid queues. We stayed until about 10pm. In Nabeul, it was civil society that took charge of the organization and was able to avoid what might trigger the government’s decision. The problem was that the communication came too late.

After Tuesday’s vaccination campaign, the government released mixed messages. In a press release delivered around 5 p.m., the health ministry announced that the second day of vaccination for Eid al-Adha would be reserved for 40-50 year olds to “avoid excessive crowds”.

On Wednesday 21 July, the 29 vaccination centers were therefore closed to the public. But in Nabeul, Mohamed Ameur Stambouli nevertheless went to one of the centers to warn uninformed residents who were queuing up hoping to get the vaccine:

Today’s numbers [Wednesday, July 21] had already been distributed. People were crazy as hell.

Since June 20, authorities have imposed a total lockdown on six regions and a partial lockdown in the capital as Tunisia faces a resurgence of the virus, driven by the Delta variant.

Faced with shortages of oxygen, medical personnel and CPR beds, the country has launched an appeal for international aid.

Less than a million people have been fully vaccinated in Tunisia, about eight percent of the population, and the number of cases has risen to one of the highest in Africa.

Death toll from riots in South Africa rises to more than 330, government says

‘There wasn’t even lava’

The wounds persist in Spain, ten years after ETA laid down its arms