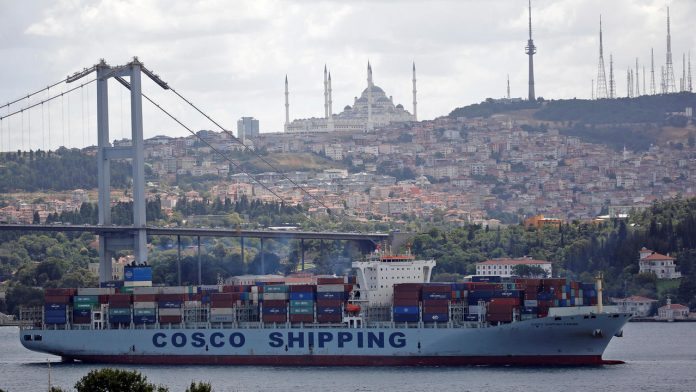 Turkey detained 10 retired admirals on Monday after openly criticizing a channel project known to President Recep Tayyip Erdogan in a country where hints of military insubordination are haunting the ghost of previous coups.

The official approval last month of plans to develop a 45-kilometer-long maritime route in Istanbul comparable to the Panama or Suez Canals has opened a debate on Turkey’s commitment to the Montreux 1936 Convention.

The pact aims to demilitarize the Black Sea by establishing strict commercial and marine rules for passage through the Bosphorus and the Dardanelles Strait leading to the Mediterranean.

“Recently, the opening of the Montreux Convention for debate in the context of the power to withdraw from international treaties and the Canal Istanbul project is worrying,” the letter reads.

On Monday, Erdogan accused the 104 retired admirals of “suggesting a political coup” by criticizing his plans for a new canal connecting the Black Sea with the Mediterranean.

“In a country whose past is filled with coups, (another) attempt by a group of retired admirals can never be accepted,” Erdogan said in a statement.

While the Ankara Chief Prosecutor’s Office has issued arrest warrants for ten former admirals who signed the letter, four others had to report to police in the Turkish capital within three days of the prosecutor choosing not to detain the other four due to his advanced age.

They are accused of “using force and violence to get rid of the constitutional order”, the NTV broadcaster reported.

Father of the doctrine of the sea

The prosecution opened a probe on Sunday against the retired admirals suspected of an “agreement to commit a crime against state security and constitutional order”.

The wording is similar to that used by prosecutors against other Erdogan critics who have been imprisoned in a repression that followed a failed 2016 coup.

The retired admirals who were arrested on Monday included some of Turkey’s most famous naval commanders.

The doctrine has emerged, especially during tensions last year between Greece and Turkey due to Ankara’s gas exploration in the eastern Mediterranean.

It claims that Turkey has the right to significant maritime borders, including the waters surrounding some Greek islands, much to Athens.

Alaettin Sevim, who was previously arrested in 2011 as part of the so-called Ergenekon coup plot against the government, who was later discredited, was also arrested.

Before the arrest warrant was issued, the state news agency Anadolu said the prosecutor’s office had decided who the “leaders” were in the open letter.

Turkish officials have reacted angrily to the letter, claiming it appears to be a call for a coup.

“To state one’s thoughts is one thing, to prepare an explanation that provokes a coup is another,” Parliament Speaker Mustafa Sentop said on Sunday.

Coups are a sensitive issue in Turkey since the military, which has long seen itself as the guarantor of the country’s secular constitution, staged three coups between 1960 and 1980.

The attempt to overthrow Erdogan in 2016 was accused of followers of the US-based Muslim preacher Fethullah Gulen in the military.

“This is outrageous in the name of democracy,” Turkish Justice Minister Abdulhamit Gul said on Monday.

“Our fight against this dark mentality continues. The necessary answer will be given within a legal framework,” Gul added.

Erdogan’s proposed £ 75 billion ($ 9.8 billion) alternative to the Bosphorus and Dardanelles raises questions about whether existing agreements would apply to the new route.

Last month, Parliament Speaker Sentop said the president “could” withdraw from the convention.

“He has the power,” he told the HaberTurk channel on March 24. “But there is a difference between possible and probable.”

Erdogan assumed power to withdraw Turkey from the treaties without parliamentary approval in 2018.

Last month, he pulled Turkey out of the world’s first binding treaty to prevent and combat violence against women.