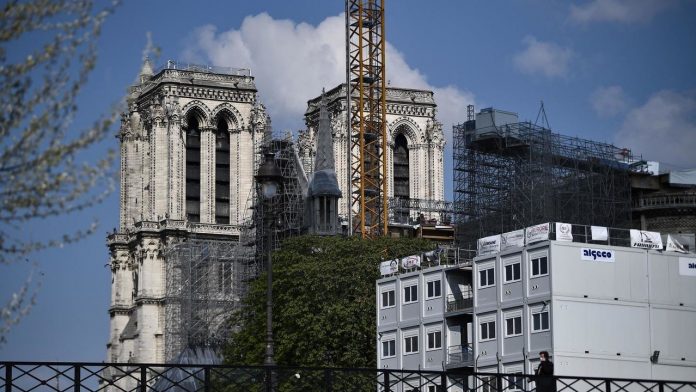 On April 15, 2019, a devastating fire swept through Paris Notre-Dame Cathedral, tearing down the spire and destroying the roof of the landmark structure. Two years later, the cathedral is still a giant construction site and is still waiting for it to emerge.

The gaping hole in the roof is still exposed to the elements and a giant rain cover will soon be installed to protect the fragile stonework.

Inside the Notre-Dame Cathedral, the extent of the damage becomes clear. The damaged floor in the Gothic structure still bears the imprint of the spire that fell through the ceiling and hit the floor on that fateful night in April 2019.

While some of Notre-Dame’s masterpieces, such as its famous 13th-century rose window, were spared by the flames, the cathedral’s arches are still in danger of collapsing.

“We give relief to the cathedral, give it crutches, support … because there are many weaknesses,” explained Damien Brisson, technical director of the restoration company Le Bras Frères.

The consolidation of the cathedral’s structure has so far cost 165 million euros.

Days after the fire, French President Emmanuel Macron promised to rebuild the cathedral within five years.

But with a deadline looming, the restoration stage has not yet begun.

“It is an extremely ambitious schedule. But we are still about to reopen the cathedral to worshipers in 2024. Of course, it will not be completely finished. There will still be work to be done on the outside, especially the outer wall and other work to finish … and above all we must finish the consolidation of the building, which will only be done this summer, says General Jean-Louis Georgelin, head of the restoration mission Notre Dame.

About 200 craftsmen, technicians and researchers are competing to return Notre Dame to its former glory, a monumental effort supported by 833 million euros in donations from around the world.