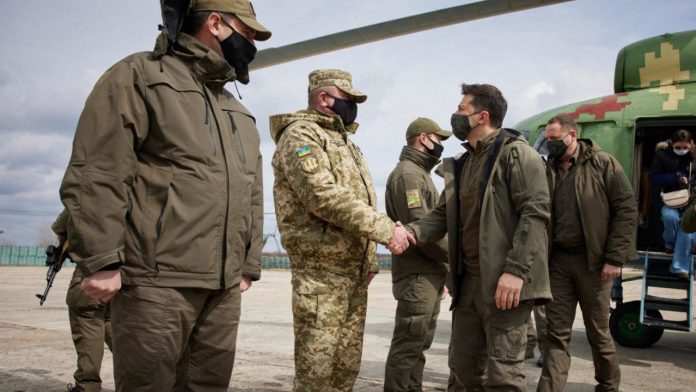 Zelensky’s visit to positions where a ceasefire “has been systematically broken in recent days” aimed at “maintaining the fighting spirit,” the presidency said in a statement.

Another soldier was killed early Thursday after separatists opened fire on Ukrainian positions with mortar and artillery, the Ukrainian military said, adding that 25 troops had been killed since the beginning of the year.

Fears have escalated into a major escalation of the conflict in eastern Ukraine, where government forces have been fighting separatists in the predominantly Russian-speaking Donbas region since 2014.

Ukraine last week accused Russia of massacring thousands of military personnel at its northern and eastern borders and on the Crimean peninsula annexed by Moscow.

The Kremlin has not denied the troop movements but insisted that Moscow “does not threaten anyone”.

Kiev’s western allies have rushed to their defense with a series of statements warning Russia to take further action and seeking explanations for its troop build-up.

The Kremlin read of the conversation also said that Putin “drew attention to the provocative actions in Kiev, which have recently deliberately aggravated the situation on the front lines”.

Earlier this week, Zelensky called on NATO to speed up its country’s request for membership in the alliance, saying it was the only way to end the conflict.

It is unclear what counteracted the recent escalation of tensions and clashes, although some observers say Moscow could test US President Joe Biden’s commitment to defend Ukraine.

In his first conversation with Zelensky earlier this month, Biden reaffirmed Washington’s “steadfast support” for Kiev in the conflict, which has claimed more than 13,000 lives since 2014.

Peace talks mediated by France and Germany since 2015 have failed to end the fighting.

Zelensky, a TV comedian and political outsider, came to power in 2019 and promised to resolve the conflict.