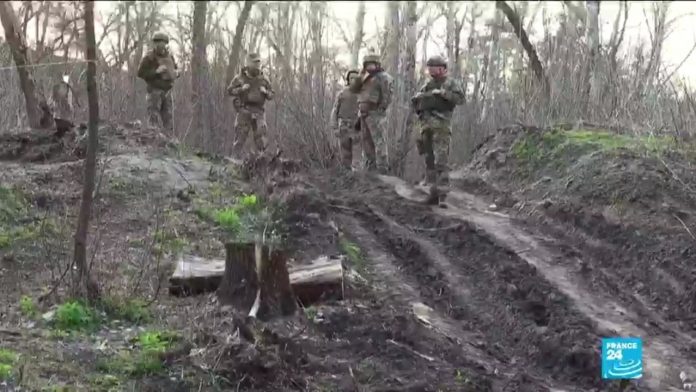 On the front lines in eastern Ukraine, militant soldiers are skeptical that US sanctions against Moscow and Kiev’s appeal for NATO help will deter Russian strongman Vladimir Putin. Facing the largest deployment of Russian troops on Ukraine’s borders since 2014, President Volodymyr Zelensky has called for more concrete help from the West, but many Ukrainian troops say they know they are alone.

“We should only count on ourselves,” Taras Mykytsey, a 52-year-old soldier, told AFP on the Zaytseve front line north of the Donetsk separatist stronghold.

The separatists, who have carved out two “People’s Republics” in eastern Ukraine, are supported by Russia.

“While we wait for something to be sent to us, Putin will not wait,” Mykytsey added with a helmet and a bulletproof vest.

Yuriy, a 29-year-old senior sergeant based near the town of Shchastya in the neighboring Lugansk region, made a similar note, saying he did not expect western boots on the ground any time soon.

“Which foreign country would like to send its people to their death?” he said.

Yuriy, who refused to give his last name, added that the Russian president would not tense up.

“Sanctions and negotiations can, of course, restrict Russia a little bit, but in general, for Putin, these negotiations are like throwing sand in the wind,” he said.

US President Joe Biden has promised his “unwavering support” for Zelensky, and Washington this week hit Moscow with new sanctions due to US election intervention and other hostile activity.

Following talks in Paris on Friday with French President Emmanuel Macron and German Chancellor Angela Merkel, the Ukrainian leader demanded a four-way summit with Putin and the resumption of a ceasefire exacerbated by a new war of clashes between Kiev troops and separatists.

‘Ready for all scenarios’

Under a gray spring sky, birdsong can be heard in the front line, but the calm spell can not hide a nail in tension and near daily clashes.

About 30 Ukrainian troops have been killed since the beginning of the year, compared to 50 last year. Most of them were victims of sniper fire.

This week “one soldier was killed and two others from our battalion were wounded” in an explosion, said 43-year-old Yuriy, speaking to AFP in the trench near Zaytseve.

Yuriy, who also refused to give his last name, said the explosion was caused by a Russian-made landmine.

The Ukrainian military accuses Moscow of trying to provoke a situation that would justify an armed operation.

“The enemy’s task is to cause as many casualties as possible and cause a return fire,” Viktor Ganushchak, deputy commander of Ukraine’s military operation in the east, told AFP in the city of Avdiivka, about six kilometers north of Donetsk. .

Russia has denied sending weapons and troops across the border, saying its troop movements do not pose a threat to anyone.

More than 13,000 people have been killed in a conflict that erupted after a popular uprising in Kiev fired a Kremlin-backed president and Moscow moved to annex Crimea in 2014.

Some Ukrainian soldiers were hard pressed to explain the Russian muscle display, while others dismissed it as merely a Sabbath.

“If it were an assault, it would be made quieter without so much hassle,” said Yuriy, senior sergeant.

“Are they preparing for an attack or are these military exercises?” he said.

“Our job is to prevent them from going any further. We have people and there are enough weapons.”

For the past seven years, Ukraine has revised its army thanks to Western aid, and Kiev’s war-hardened soldiers say they are ready for a repeat of Moscow’s aggression in 2014.

“We are ready for all scenarios,” Ganushchak said. “This is our country, we will defend it.”