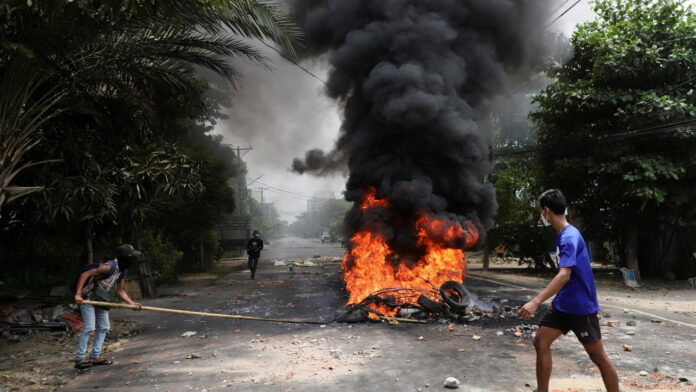 The UN envoy to Myanmar asked the Security Council to take action on Wednesday in the Asian nation’s escalating crisis, warning of the risk of civil war and an impending “bloodbath” as the junta violently suppresses pro-democracy protests.

“I appeal to this council to consider all available tools to take collective action and do what is right, what the people of Myanmar deserve and prevent a multidimensional disaster,” said special envoy Christine Schraner Burgener to the closed session, according to remarks received by AFP.

She said she remained open to dialogue with the junta but added: “If we just wait until they are ready to talk, the ground situation will only get worse. A bloodbath is imminent. ”

Barbara Woodward, the UN envoy from Britain, who requested the meeting, told reporters that the Security Council was “united in its condemnation” and discussed “a range of measures at our disposal.”

But China, which is considered Myanmar’s main ally, excludes sanctions.

“Unilateral pressure and calls for sanctions or other coercive measures will only exacerbate tensions and confrontations and further complicate the situation, which is not constructive,” Chinese Ambassador Zhang Jun said in a statement.

The session came after Suu Kyi’s legal team said earlier Wednesday that the fired leader appeared to be in good health despite two months in prison.

Suu Kyi, 75, has not been seen in public since she was ousted, but a member of her legal team, Min Min Soe, was called to a police station in the capital Naypyidaw for a video conference with her.

Suu Kyi faces a series of criminal charges, and conviction could lead to her being banned from her life for life.

The coup and the junta’s subsequent actions have triggered international condemnation.

Britain called for an emergency meeting after the military dramatically increased its use of lethal force against protesters over the weekend.

In another violent escalation, Myanmar’s military Saturday launched the first airstrikes in Karen State in twenty years after a rebel group seized a military base – raising fears of a return to armed conflict in the ethnically diverse nation.

“The cruelty of the military is too serious and many (armed ethnic warriors) take clear positions against the opposition, which increases the possibility of civil war on an unprecedented scale,” Burgener said.

“Failure to prevent further escalation of atrocities will cost the world so much more in the long run than investing now in prevention, especially by Myanmar’s neighbors and the wider region.”

Zhang, the Chinese ambassador, said he wanted Myanmar to “restore peace, stability and constitutional order as early as possible and continue to promote democratic transition.”

He also called for protection for foreign companies – a major concern for China, which has seen dozens of factories burn in the middle of pines against Beijing.

Earlier, a group of fired MPs from the Suu Kyi National League for Democracy (NLD), who have been working underground against the junta, said they would form a “new civilian government” in the first week of April, without giving further details.

The world powers have repeatedly condemned the violent opposition to dissent and hit sanctions with sanctions, but so far the pressure has not affected the generals.

The US State Department has ordered the removal of non-essential diplomatic personnel and their families from Myanmar, and Japan – a top donor to the country – has stopped new aid payments.

In addition to imposing targeted sanctions, the United States has also repealed a trade pact with Myanmar.

Linda Thomas Greenfield, US Ambassador to the United Nations, raised the possibility of action if the military does not resign.

“If they continue the attacks they made on civilians, we need to look at how we can do more,” she told reporters.

The rising bloodshed has also angered some of Myanmar’s 20 or so armed ethnic groups, who control large territories mostly in border regions.

Three of them – the Ta’ang National Liberation Army (TNLA), the Myanmar Nationalities Democratic Alliance Army and the Arakan Army – appeared on Wednesday to join the protesters’ fight.

Brigadier General Tar Bhone Kyaw of the TNLA told AFP that all three would end their ceasefire with the military.

“If they continue to kill the people, we have no reason to extend unilateral ceasefire with them,” he said.