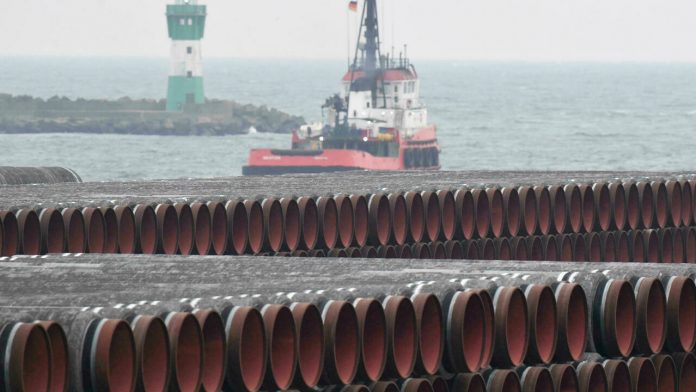 The United States and Germany have reached a deal that will allow the completion of a controversial Russian gas pipeline to Europe without imposing further US sanctions, a senior US official said on Wednesday.

Victoria Nuland, Secretary of State for Political Affairs, told Congress that the two governments will soon disclose details of the pact that aims to allay US and Eastern and Central European concerns about the impact of the Nord Stream 2 project. to take.

However, there is strong bipartisan opposition to the pipeline in Congress, as well as in Ukraine and Poland, who fear Nord Stream 2 will undermine Europe’s energy security. Like the Trump administration before that, the Biden administration is against the pipeline, but insists sanctions won’t stop it.

Nuland, the third US diplomat, told the Senate Foreign Relations Committee that the US and Germany would issue a joint statement on the pipeline later Wednesday. She said Washington and Berlin had pledged to impose sanctions on Russia and German companies if Moscow would use the pipeline as a political weapon.

Nuland did not go into details, though congressional officials who were aware of the outline of the deal said Tuesday it would allow completion of the Nord Stream 2 pipeline without Germany or Russia facing new US sanctions. In return, the US and Germany will make certain concessions to Ukraine and Poland, they said.

Nuland categorically denied reports that Ukraine had been warned not to complain publicly about the deal, noting that Foreign Ministry adviser Derek Chollet visited both Kiev and Warsaw this week to brief them on the deal. Also on Wednesday, the White House announced that President Joe Biden would welcome Ukrainian President Volodymyr Zelenskyy to the White House on August 30.

“The visit reaffirms the United States’ unwavering support for Ukraine’s sovereignty and territorial integrity in light of Russia’s continued aggression in the Donbas and Crimea, our close cooperation on energy security and our support for the efforts President Zelenskyy to tackle corruption and establish a reform agenda based on our shared democratic values,” the White House said in a statement.

The Nord Stream 2 project has presented the Biden administration with a major foreign policy dilemma. US officials from both sides have long feared it would give Russia too much power over European gas supplies, potentially cutting off gas supplies to Russian opponents Ukraine and Poland. But the pipeline is nearing completion and the US is determined to rebuild ties with Germany damaged during the Trump administration.

Biden’s approach to Ukraine is also a sensitive political issue. Former President Donald Trump’s attempt to pressure Zelenskyy to dig dirt on Biden and his son led to Trump’s first impeachment. He was later acquitted by the Senate.

Nord Stream 2 has been a subject of intense debate between US and German officials for some time, and it was a key agenda item during Biden’s meeting with German Chancellor Angela Merkel last week. Merkel supports the pipeline, and Biden has suggested that punishing Germany for that support would be counterproductive to wider US interests.

But like the Trump administration before it, the Biden administration views the Nord Stream 2 project as a threat to Europe’s energy security and has imposed sanctions on some of those involved in its construction.

Nuland said the US continues to oppose the pipeline, but said Biden had waived sanctions against the German company building the pipeline and its top executives because the sanctions would have been counterproductive.

She and others have defended the waivers, saying they can be revoked at any time and that that threat actually gives the US more leverage. That argument has been mocked by pipeline opponents.

Poland, Ukraine and other Eastern and Central European countries bypassed by the pipeline are concerned that Russia will use the gas supplies as a political weapon. Lawmakers from both sides of the aisle in Congress and some members of the administration are sympathetic to that position.

Under the terms of the expected agreement between the US and Germany, Ukraine would receive $50 million in green energy technology loans, a guarantee to reimburse the gas transit fees it will lose if it is bypassed by the pipeline until 2024, and a commitment from both Germany like the US that sanctions will be revised if Russia uses the gas as a political weapon, according to congressional officials.

In a nod to Poland, Germany will also agree to sign the so-called “Three Seas Initiative”, a program promoted by the EU and the US that aims to boost investment, infrastructure development and energy security among the countries bordering the Baltic Sea, and Adriatic seas, according to the aides.