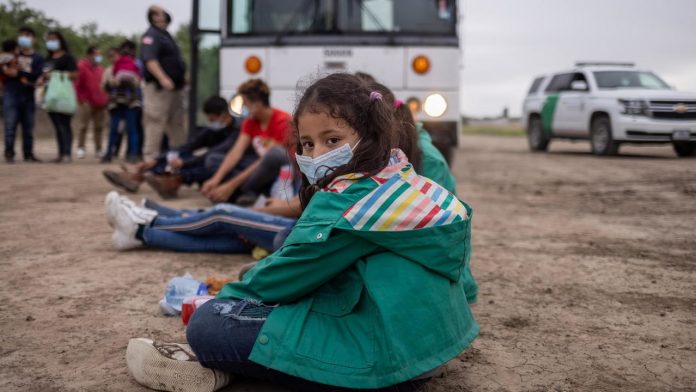 Reports of unaccompanied migrant children being forced to stay overnight in parked buses at the Dallas Convention Center are “completely unacceptable” if true, US Secretary of Health and Human Services Xavier Becerra said Friday.

Dr. Amy Cohen, a psychiatrist and executive director of the advocacy group Every Last One, said a 15-year-old Honduran boy she works with was held on a bus from Saturday to Wednesday, who used the bus bathroom during that time and was unable to was able to move freely or communicate with family.

The boy met at least three other children who spent the same amount of time in the Kay Bailey Hutchison Convention Center parking lot, said Cohen, who has also been in contact with another child who had previously been trapped on a bus for a long time.

It is unclear how many children were on buses at night.

“This is completely unacceptable,” Becerra said. “ We’re looking into this quickly to get to the bottom of what happened, and we’ll work to make sure this never happens again. The safety and well-being of the children is our top priority. “

White House press secretary Jen Psaki said, “There is no excuse for this type of treatment.”

The reports are “outrageous, they are unacceptable and they fall short of our childcare standards,” said Psaki.

The Honduran boy’s experience, first reported by NBC News, comes as Health and Human Services massively expands its capacity to accommodate migrant children until they can be placed with a sponsor in the United States, usually parents or close relatives, while their cases are settled through immigration. court. It comes in response to the largest influx of unaccompanied children ever.

The department, whose accommodation is more suitable for longer stays than Border Patrol’s facilities, has expanded its capacity to approximately 20,000 beds, from less than 1,000 by mid-February.

It has opened 14 emergency admission centers, including in the Dallas Convention Center and other major venues. The Dallas facility opened in February with plans to house up to 3,000 children.

Health and Human Services had 20,397 unaccompanied children in custody on Wednesday.

The government flew the Honduran boy to Seattle to reunite with his mother and uncle after NBC News inquired about his status.

MVM Inc., a government transportation contractor, said it has been “safely and professionally” transporting migrant children and families for more than six years.

“In the past seven weeks, the number of children needing companions in this pandemic environment has risen to over 7,100, creating challenging travel logistics and increasing waiting times on the way to reunification sites,” the company said in a statement.

MVM said it had suffered some delay in a 24-hour regional hub where buses converge to get children on their way to join the family, resulting in “a child staying in that location longer than our target wait of four hour. This is against our policy and we are conducting an internal review of this incident. “

The company said the child had access to an air-conditioned bus with food and snacks, bottled water, and personal protective equipment.