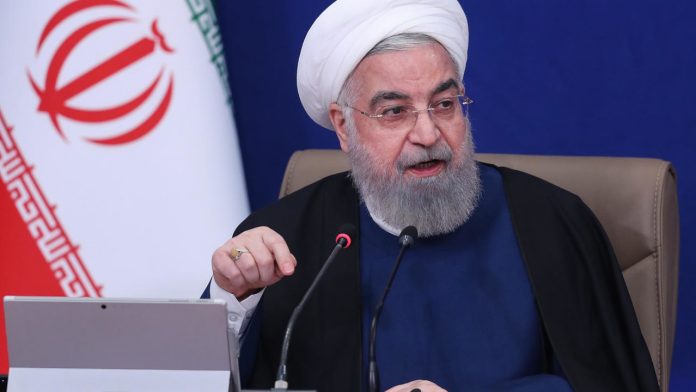 The United States and European countries participating in Iran’s nuclear deal backed Wednesday on Tehran’s decision to enrich uranium by 60% purity, with the top US diplomat calling the move “provocative” and questioning Iran’s seriousness with the talks.

Iran has said it will enrich uranium to 60% – a big step closer to the 90% weapons-grade material – in response to what it says was an act of sabotage by Israel against its main nuclear power plant last week.

US Secretary of State Antony Blinken said Tehran’s intention raised questions about its seriousness over talks in Iran between Iran and the world powers to revive the 2015 nuclear deal.

“We take very seriously its provocative announcement of an intention to start enriching uranium by 60%,” Blinken said at a news conference at NATO headquarters in Brussels. “I must tell you the step calls into question Iran’s seriousness regarding the nuclear negotiations,” he said.

The nuclear deal was dissolved when Iran broke its uranium enrichment borders in a gradual response to the US withdrawal from the 2018 pact and Washington’s reintroduction of harsh economic sanctions against the Islamic Republic.

Last week, Iran and other signatories held what they described as “constructive” talks to re-establish the deal that emerged from the Trump administration – which saw conditions as too easy for Tehran.

The explosion at Iran’s uranium enrichment plant came on Sunday before a second week of talks. Israel, which supported former US President Donald Trump’s hard line against Iran, has not formally commented on the incident on Iran’s Natanz website, which appeared to be the latest twist in a long-running secret war.

Britain, France and Germany also said Tehran’s new decision to enrich by 60%, from the 20% it has reached so far, and activate 1,000 advanced centrifuge machines at the Natanz plant was contrary to the talks. They said they rejected “all escalating measures from all actors”, in a clear signal to Israel.

“Iran’s announcements are particularly regrettable given that they come at a time when all JCPoA participants and the United States have entered into extensive discussions with a view to finding a swift diplomatic solution to revive and restore JCPoA,” the three countries said in a statement. with reference to the 2015 deal.

“Iran’s dangerous communications in recent times run counter to the constructive spirit and good faith in these discussions,” the talks, which resume between Iran and the global powers in Vienna on Thursday, aimed to salvage the agreement.

An American official who spoke anonymously said that the events of the past week had not necessarily made it easier. “But I’m not going to speculate if that means we can not reach an agreement … We would not go if we thought it was over, but I’m not going to say we expect a breakthrough.”

In a blatant rejection later on Wednesday, Iranian Supreme Leader Ayatollah Ali Khamenei said the United States was trying to impose conditions on the deal and the European powers made Washington’s bid.

“The nuclear negotiations in Vienna must not be a talk of attrition … This is harmful to our country,” Khamenei, who has the final say on Iranian state affairs, was quoted as saying by state television.

Biden took office in January with a commitment to rejoin the deal if Tehran returns to full compliance with its enrichment restrictions. Tehran has repeatedly said that all sanctions must be lifted first.

“We have already explained Iran’s policy. Sanctions must be removed first. When we are sure that this has been done, we will fulfill our commitments, says Khamenei, according to the semi-official news agency Tasnim.

“The offers they make are usually arrogant and humiliating and are not worth looking at.”

Iran has “almost completed preparations” for launching 60% enrichment and has announced to the International Atomic Energy Agency that it will activate 1,024 more IR-1 centrifuges, the older first generation of machines at Natanz, the UN nuclear watchdog said later on Wednesday.

Iran’s leading golf enemy Saudi Arabia also weighed in on Wednesday, saying it believed that any revival of the nuclear deal should be a starting point for further talks involving regional states to extend the deal.

Rayd Krimly, head of policy planning at the Saudi Foreign Ministry, told Reuters that any deal that did not effectively address security concerns in the countries of the region would not work, and Riyadh consulted the global powers.

“At the very least, we want to make sure that all the financial resources made available to Iran through the nuclear deal are not used … to destabilize the region,” he said.

Iran’s deal with the six powers covers the fissile purity with which it can refine uranium to 3.67%. It is well below the 20% achieved before the agreement and well below the 90% suitable for a nuclear weapon.