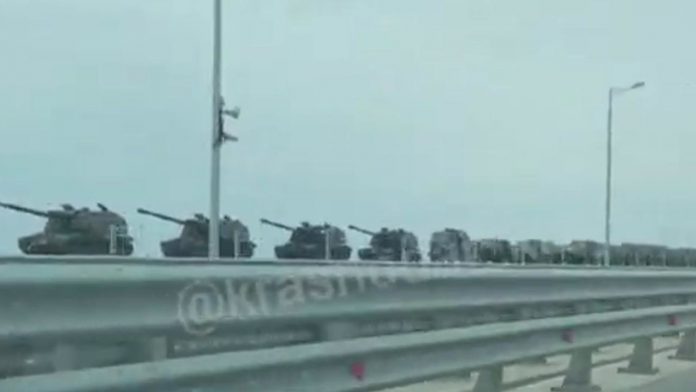 A large number of Russian military convoys on the way have been discovered in Crimea and Russian regions bordering Ukraine since the end of March. The Ukrainian president condemned what he called “provocations” and the Russian Ministry of Defense finally confirmed that military exercises were underway. Videos of these troop movements have caused panic on social media, and some fear an imminent military offensive.

Artillery pistols, trucks and armored vehicles have crossed the bridge from Russia to Crimea, a former Ukrainian peninsula annexed by Moscow in 2014. Several media outlets warned of Russian aggression, after recording a video showing these troop movements published on the Telegram messaging app on 29 March in a discussion group for people living in Krasnodar (the region bordering Crimea).

This video was published in the Telegram messaging app @krasnodar_kray on March 29th. There was no trace of this video that was shown online before March 2nd

Our team was able to verify that the video really shows the Crimean Bridge, which was built in 2018 across the Kertch Strait to connect the peninsula to the rest of the continent. To verify the location of this video, we compared it to another video posted on social media on May 16, 2018 by people filming themselves across the Crimean Bridge. In both films, there are railway tracks along the road. The street lamps have the same unique shape and in both there are red spikes on the guardrails between the two lanes.

In the latest video, the railway tracks are to the left of the leader. We examined the layout of the tracks on Google Maps and found that the Russian military convoy was on its way to Crimea.

To the left, we can see a video capture of the video showing a military convoy on March 29. To the right, a screen capture of a video filmed on the Crimea Bridge. © Screen captures of videos published on Telegram and Youtube.

To the left you can see a screenshot of the video showing the Russian military convoy on March 29. The picture to the right shows a screen grab of a video filmed on the Crimean Bridge. © screengrabs of videos published on Telegram and YouTube.

These deployments were part of a series of military exercises, according to the press service of the southern Russian military region. Kremlin spokesman Dmitry Peskov said on April 1 that these movements did not pose a threat.

Ukrainian President Volodymyr Zelensky condemned a “demonstration of power” and “provocations” by Russia. On April 3, Kiev announced that it would partner with United Kindgom to conduct joint military exercises in the presence of NATO troops this summer.

According to the New York Times, almost 4,000 Russian soldiers were deployed near the Ukrainian border. These important movements of troops and military material were witnessed, filmed and published on social media by a number of people.

Military vehicles in the border regions of eastern Ukraine

Crimea was not the only region to see troop movements, other deployments occurred in other regions bordering Ukraine in the following days. Some of the vehicles in the convoys had their license plates covered, as shown in this video posted on Twitter on April 2 and filmed in the Rostov region:

In the video, you can hear the driver wondering where these military vehicles with covered license plates are going. This video has not appeared online before this post.

The Russian blog Conflict Intelligence Team discovered that this video was filmed in Rostov near Don on the M-4 highway, 90 kilometers from the border with Ukraine. We checked Google Street View of this place and noticed that the ads and buildings along the road were the same as those shown in the video. The video shows the convoy heading north, towards the border with Ukraine.

People also filmed Russian military convoys in the Voronej region, which also borders Ukraine. In this video, published on TikTok on April 5, a driver filmed a row of trucks transporting armored vehicles when he suddenly spotted another 50 vehicles and dozens of soldiers gathered next to a railway line.

The first vehicle transports a tank equipped with several rocket launchers. This post is the first time this video appears online.

Jowharobservers identified the scene where this video was filmed, near Maslovka train station in the city of Voronej. The Conflict Intelligence Team blog came to the same conclusion. In Google Street View, you can see the two bus stops facing each other with two blue buildings in the background on one side of the road and pink houses on the other. Shortly after the bend in the road, you can see the empty place where the troops gather. The shape and color of the car’s license plates, which are completely visible here, show that they belong to the Russian army.

On the left, a screen capture of the TikTok video showing the military convoy. Right, the same place on Google Street View. Google’s image of 2015, the pedestrian crossing has meanwhile been effected but the panels indicating part and other of the street demeurent. © Screen captures from a video posted on TikTok and the location where it was filmed on Google Street View.

To the left you can see a screenshot of the TikTok video showing the military convoy. To the right you can see the same place on Google Street View. The Google image is from 2015. The color that indicates a pedestrian crossing seems to have been removed from the road over the years. However, the signs delimiting it on both sides of the road remain. © Screengrabs from a video posted on TikTok and the location where it was filmed on Google Street View.

Helicopters filmed by residents of the Rostov region

Residents of the Rostov region also filmed dozens of military helicopters. This video, published on TikTok on March 30, shows five helicopters flying over an official building:

The caption on the video contains the hashtag #Salsk. This post is the first time this video has been shared online.

It shows the courthouse in Salsk, which is located 300 km from the Ukrainian border. Its beige side tracks with gray stripes are immediately recognizable, as are the two black lamp posts on either side of the entrance.

Another video was published on TikTok the next day with the text “Rostov region, 16 helicopters flying towards Ukraine”. Judging by a comment made about another of his TikTok posts, it seems that the person who filmed this video also lives in the city of Salsk.

Ten helicopters are visible in this video. This post is the first time this video appears online.

During the video, pro-Russian and pro-Ukrainian users exchanged hostile comments about the conflict.

Tensions will escalate in 2021

The Russian military exercises near the Ukrainian border have taken place against the background of rising tensions in the Donbass region. Since January this year, 21 Ukrainian soldiers have been killed on the front lines between Ukraine and the separatist regions of Donetsk and Luhansk. The number of crimes against ceasefire increased by 30 percent between February and March. Paris and Berlin both said they were concerned about an increase in ceasefire violations in a press release published on April 3.

Russian military analyst Alexandre Golts told AFP he believed the latest military exercises were likely to affect diplomatic talks with the West, which have stalled for several months.

Katharine Quinn-Judge, an analyst specializing in Ukraine at the International Crisis Group, told Jowharthat these troop movements were likely a warning.

“The Kremlin tends to believe that Ukraine can launch an attack with the support of Washington, now or in a few months. It is basically a demonstration of power ”.