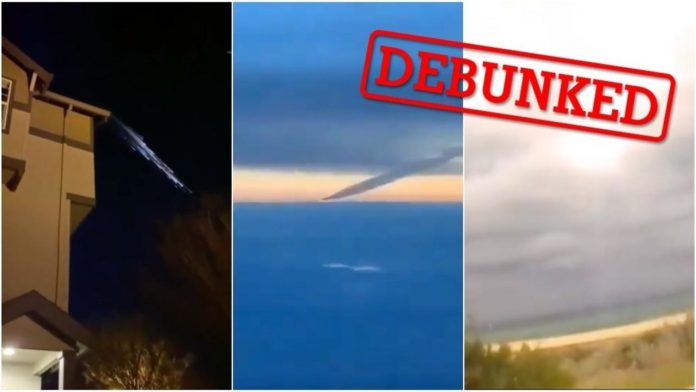 Since authorities announced last weekend that a Chinese missile would fall back to Earth in an uncontrolled re-entry, many fake videos of this incident have appeared on social media and have even made their way to international media outlets.

According to state media, the Long March 5B was re-released into the atmosphere at 10:24 a.m. Beijing time on Sunday, May 9, 2021. The coordinates put the point of impact in the Indian Ocean somewhere above the Maldives archipelago and south of India.

Since then, many images have been circulating on social media, mainly on Twitter, showing supposedly authentic images of the falling Chinese spaceship. At least three of these videos have been identified as fake by the Jowhar Observers team.

Video 1: A video of the falling Chinese missile? No, it’s a meteor in Australia

This video was shared on Twitter by several users, who claim it shows the moment Long March 5B re-entered the atmosphere. However, this video was actually filmed in 2016.

If you look closely you will see the date and coordinates in the lower right corner of the video.

You can find the original video with the Invid app (which you can see here). This video was published on February 18, 2016 and shows a meteor falling from the sky, a natural phenomenon that occurs several times a year.

Video 2: A video of a missile exploding in the atmosphere? Yeah, but it shows another missile that landed in March. While this video claims to show the Chinese spacecraft, it actually shows another space-related incident.

Filmed on March 25, 2021, this footage shows the debris from the SpaceX Falcon 9 as it returned to Earth. They capture the second stage of the rocket’s reentry process, when it disintegrated on its reentry to Earth’s atmosphere. The video has been posted on Instagram pages as below.

Video 3: A video of the rocket landing in the ocean? No, it’s probably just a civilian plane

An Indian Twitter account claims to have received a video via WhatsApp about the moment the missile landed in the Pacific Ocean.

Many international media outlets, such as the UK’s Daily Mail, reached out to the ‘owner’ of the video on Twitter to get permission to publish it. Others, like this Chinese television channel or this Italian one, broadcast the clip on the air.

The JowharObservers team has not been able to find the original source of this video. However, visual cues indicate that it is not showing a missile crash. For example, you can see lights flash in a very specific and homogeneous way, like in a civil plane.

To find out more, we reached out to Mick West, an aviation expert and founder of the Metabunk website, who told us what to see in the video.

What we see is an airplane, there are other examples of similar videos on the internet. It has a smoke trail, which can seem strange at an angle, but it’s just a compressed perspective. The plane flies towards the camera and is below the camera, giving the illusion that it is tilted down. All planes like the one in this video [and also in the one below] are in level flight: this means that they are neither ‘up’ nor ‘go down’.

This video is also recorded in ridiculously low resolution. This is a common sign of a hoax. If the video were of better quality it would be easy to tell it’s an airplane. And the “smoke” we see in the video is a contrail, a kind of cloud made of water.

Another simulation and aviation expert from ‘The Jetesons Association’, who prefers to remain anonymous, added:

What we see in this video is an airplane. A piece of debris literally falls while the trajectory visible on the video falls faintly. I also seem to see navigation lights, so this is by no means a piece of rocket or launcher.

While there is no evidence to fully confirm that this video shows an aircraft, one thing is certain: it cannot be the Long March 5B missile, as visual cues and our aviation experts prove.

Actual footage from the Long March 5B

Long March 5B was launched on April 29, 2021 with the main module of China’s new space station and was on the first of 11 expected missions to complete the project.

One of the few verified videos showing Long March 5B debris on Earth so far can be seen in the video below published by The Guardian news site.

It is normal for parts of rockets to fall back to Earth. But this caused great concern due to the lack of accurate information about where the 18 tons of debris, a colossal weight not seen for decades, would fall.