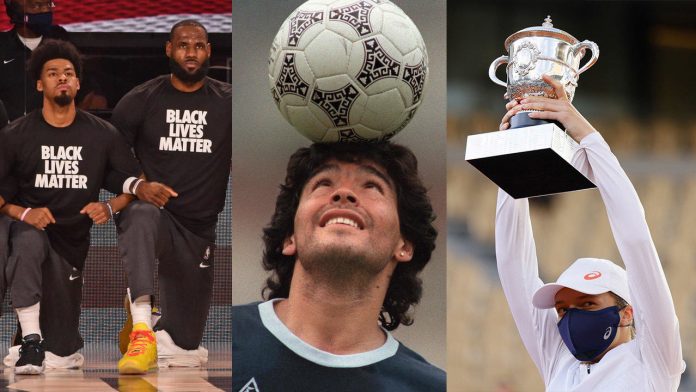 The year opened and ended with fans in mourning over the passing of sport legends Kobe Bryant and Diego Maradona. In between, the coronavirus pandemic forced global sport into an unprecedented shutdown, while athletes increasingly used their social clout to protest against racial injustice.

2020 should have been a bumper year for sport fans around the world, headlined by the summer double-bill of the Tokyo Olympics and the Euro football tournament. Instead, the calendar year’s mouthwatering schedule was upended by the novel coronavirus pandemic, which forced the postponement or cancellation of virtually all sporting events, from amateur leagues to the Olympic Games – aka – “the biggest show on earth”.

Starved of sporting action, fans were left with little choice but to watch replays of past tournaments or develop a liking for the little-known Belarusian football league, the only one to go ahead regardless of the pandemic.

For the first time since World War II, organisers were forced to reschedule the Summer Olympics. Holding the event in 2021 will be “a testament to mankind’s defeat of the new virus”, said Japan’s outgoing Prime Minister Shinzo Abe, seeking to put a brave face on a postponement that could cost up to 2.8 billion dollars.

The Tokyo Olympics are now scheduled to take place in 2021. © Charly Triballeau, AFP

UEFA, European football’s governing body, also postponed the Euro 2020 tournament by 12 months. Other events were simply cancelled outright, including Wimbledon, the most prestigious tournament in tennis, which shut down for the first time since the wartime Blitz.

In a risky gamble that ultimately paid off, Roland Garros chose instead to postpone its early summer tournament until the autumn. The foul weather made little difference to perennial champion Rafael Nadal, who cruised to his 13th French Open. But there was more suspense in the women’s event, which saw 19-year-old Iga Swiatek become the first Polish player to win a Grand Slam singles title.

Iga Swiatek is the latest in a continuing trend of first-time Grand Slam champions in women’s tennis. © Thomas Samson, AFP

French sport’s other major summer rendez-vous, the Tour de France, also opted for a later start due to the pandemic. Local fans were hoping for a home duel between Julian Alaphilippe and Thibaut Pinot but had to settle for an all-Slovenian tussle pitting Primoz Roglic against the unheralded Tadej Pogacar. It proved to be a thrilling edition of the world’s premier cycling race, with the 21-year-old Pogacar ultimately pinching the yellow jersey in the penultimate stage.

Just weeks later, Alaphilippe more than made up for French disappointment at the Tour by winning the road cycling world championships in Italy, becoming the first Frenchman to wear the rainbow jersey this century.

Julian Alaphilippe celebrates on the podium in Imola on September 27. © Marco Bertorello, AFP

By then, football stars had been forced back into action, bowing to pressure from cash-strapped leagues and broadcasters clamouring for some live entertainment. However, with the Covid-19 still rampant, the action would take place at soulless venues devoid of fans.

Germany’s Bundesliga was the first major football championship to resume competitive matches in May, soon to be followed by other leagues. France’s Ligue 1 was a notable exception after the local government decided to end the season early, leaving bottom clubs Amiens and Toulouse flummoxed as they were relegated with 10 games left to play.

The top leagues offered few surprises, with Paris Saint-Germain, Juventus and Bayern Munich holding on to their titles and Real Madrid toppling Barcelona in Spain. In England, Liverpool ended their 30-year drought to clinch the Premier League title, winning a staggering 32 matches from 38 fixtures.

Meanwhile, UEFA opted to wrap up its flagship club competition, the Champions League, with a “Final Eight” mini-tournament held in Lisbon in August. After suffering a string of embarrassments in recent years, big-spending PSG finally reached their maiden Champions League final, ending Atalanta’s fairytale run along the way. But the Parisians could not find a way past Bayern Munich, who crushed Leo Messi’s Barcelona 8-2 en route to the title.

The French champions went one step further in the women’s game, with Wendy Renard’s Lyon clinching their fifth consecutive Champions League title, matching a feat achieved only by the famous Real Madrid of Alfredo Di Stefano, between 1956 and 1960.

Though unprecedented in its format, UEFA’s “Final Eight” was several steps short of the isolation “Bubble” set up by NBA officials at Walt Disney World in Florida to protect the world’s top basketball stars from Covid-19. A $190 million investment, the special isolation zone ensured no recorded cases of Covid-19 among the 22 teams taking part. Three months after checking into the Bubble, LeBron James led the Los Angeles Lakers to victory over the Miami Heat in the NBA Finals, earning his fourth Finals MVP trophy.

The Los Angeles Lakers clinched their first title in a decade at the NBA Finals in the Florida “Bubble”. © Douglas DeFelice, AFP

A success in sporting, health and financial terms, the NBA Bubble had an even bigger impact as a platform for players and officials to protest against racial injustice in the wake of the police killings of George Floyd and Breonna Taylor.

Players took a knee during the national anthem and wore T-shirts and masks with the words, “Black Lives Matter”. NBA officials also painted “Black Lives Matter” on the courts and allowed a number of messages on the team jerseys, such as “Vote” and “I can’t breathe”. At one game in the WNBA, the women’s league, players wore white T-shirts with seven bullets on the back in protest at another police shooting.

NBA players agreed to enter the Bubble on condition that they could use it as a platform to protest against racial injustice. © David Dow, AFP

BLM protests featured prominently in other sports as well. The US Open expressed support by featuring art by Black artists in the stands of a mostly empty Arthur Ashe stadium, while Japan’s tennis star Naomi Osaka sported customised black face masks, each bearing the name of a victim of allegedly racist killings. Britain’s Andy Murray, a former world number one, was among numerous athletes to take a knee during an official match this year.

Similar gestures could be seen across the world in sports as diverse as baseball, rugby, cricket, volleyball and racing. The protests spread to European football grounds, where racism had long been allowed to thrive unchecked. In one incident, players walked off the pitch during a Champions League match between Paris Saint-Germain and Istanbul Basaksehir after an official was accused of using racist language.

Brazilian forward Neymar (centre) and other players take a knee ahead of PSG’s match against Istanbul Basaksehir FK at the Parc des Princes on December 9. © Franck Fife, AFP

In a rare move, some of France’s top footballers weighed into a growing debate about racism and police brutality in the country following a series of high-profile incidents, including the brutal beating of a Black music producer by white officers. And in a sign of growing political awareness and outspokenness, one of them – World Cup winner Antoine Griezmann – announced he was ending a sponsorship deal with Huawei over claims of Uighur surveillance in China.

Greatest of all time?

Among the year’s more prominent anti-racism protesters was Formula One champion Lewis Hamilton, who celebrated on the podium with a black power salute after winning the British Grand Prix at Silverstone. F1’s only Black driver, Hamilton took a knee ahead of every race and sported several T-shirts with slogans from the Black Lives Matter movement. He criticised former champions who accused him of turning “political”, saying his anti-racism protest was about human rights and not politics.

Lewis Hamilton takes a knee ahead of the Abu Dhabi Grand Prix on December 13. © Hamad I Mohammed, AFP

The Briton’s victory at the Turkish Grand Prix in November sealed the championship and his seventh title, matching Michael Schumacher’s record tally – a feat once deemed impossible. Hamilton’s success fuelled talk of whether he should be regarded as the greatest Formula One driver of all time. He certainly became the most successful in history, racking up more race wins – a staggering 94 – than any other before him.

Hamilton’s 94th triumph, however, was overshadowed by a horrific accident involving French driver Romain Grosjean, which very nearly ended in tragedy. Grosjean’s car split in two after slamming into metal barriers at over 200 km per hour at the Bahrain GP. The Frenchman was soon engulfed in a huge fireball but, incredibly, escaped with only burns to his hands.

Romain Grosjean emerged from this crash with just burns to his hands. © Bryn Lennon, AFP

The sporting year opened with another horrific accident, one that left no chance of escape. On January 26, the world was shocked by news that 41-year-old basketball legend Kobe Bryant had died in a helicopter crash along with his teenage daughter Gianna, herself a rising star of the game, and seven other passengers.

Days after the crash, twenty-thousand people filled Staples Center in Los Angeles for a nationally televised memorial that opened with a song by Beyonce, followed by a tearful eulogy by Michael Jordan. Magic Johnson, a fellow icon of the Los Angeles Lakers, described Bryant as the “greatest Laker of all time”. Months later, the LA squad dedicated their record-tying NBA Finals victory to Kobe and Gianna.

Lakers fans stand in line to celebrate the team’s NBA Finals win in front of a mural of Kobe Bryant and his daughter Gianna on October 11. © Brandon Bell, AFP

There was more global grief – and “greatest-of-all-time” debate – in late November when Diego Maradona, the legendary Argentine footballer, died of a heart attack aged 60. Maradona famously scored the “hand of God” goal at the 1986 World Cup, followed moments later by a prodigious run through the England defence that put Argentina firmly on course for the title.

Gary Lineker, who scored England’s only goal that day, paid tribute to “the best player of my generation and arguably the greatest of all time”. Argentina declared three days of national mourning in tribute to the beloved footballer, while Maradona’s longtime club Napoli renamed its stadium after the man who carried the former Serie A minnows to glory in his prime.

The day before Maradona’s death, news that former France winger Christophe Dominici had passed away aged 48 stunned the world of rugby. A stylish player, Dominici was best remembered for his scintillating display in France’s famous victory over the All Blacks at the 1999 World Cup. In a tribute to his former opponent, New Zealand legend Dan Carter said the Frenchman “epitomised French flair”.

Weeks later, French sport bid farewell to another beloved figure, the veteran football coach Gérard Houllier. A former manager of France’s international team, Houllier reached a career high in 2001 when he led Liverpool to a historic five titles, clinching the FA Cup, the League Cup, the Charity Shield, the UEFA Cup and the UEFA Super Cup, all in a single season.

A portrait of French rugby star Christophe Dominici at his funeral in Hyères on December 4. © Christophe Simon, AFP