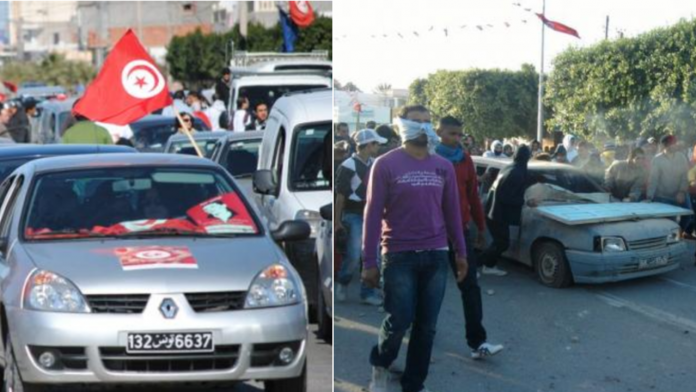 Ten years ago, on December 17, 2010, Mohamed Bouazizi, a street vendor, lit up to the brim with police harassment in Sidi Bouzid, a marginalized city in central Tunisia. His actions sparked a never-before-seen protest movement, which led to the fall of President Ben Ali. The editors of the Observers published pictures from the demonstrations from the beginning, even though the authorities denied their existence – all thanks to our observers.

On December 17, 2010, when the young Mohamed Bouazizi set himself on fire in front of the prefecture of Sidi Bouzid, there was a small group of trade unionists from the Tunisian General Labor Union [Editor’s note: in French, l’Union générale tunisienne du travail, UGTT] who acted and organized a protest in front of the governor’s headquarters. Among them was our Observer Slimane Rouissi, a union member of UGTT. Tunisian journalist Sarra Grira recalls:

“I had already known Slimane Rouissi for several months when the protests on December 17 broke out in Sidi Bouzid. I had interviewed him in July because he was participating in a sit-in organized by farmers who had been removed from their land in the Regueb region, not far from Sidi Bouzid. In fact, Mohamed Bouazizi’s uncle was one of the peasants who had been removed from their land. This story is directly related to Bouazizi’s death because he had worked with his uncle in Regueb since 2006, and the whole family was forced to move to Sidi Bouzid after his uncle’s land was removed.

At the time, this sit-in was an exceptional event, as demonstrations were banned under Ben Ali.

I contacted Slimane Rouissi again on December 17, and he sent me amateur pictures of the protest, which we immediately broadcast on FRANCE 24’s TV news broadcast. Thanks to him, we were one of the very first media to broadcast images of the uprising, even as the Tunisian public media continued to deny its existence.

It was another observer, the journalist and political opponent Sofiène Chourabi, who has been missing in Libya since September 2014, who gave me Slimane Rouissi’s contact details.

Demonstration ahead of Sidi Bouzid’s governor in December 2010. © F24

Video showing the protests in Sidi Bouzid on December 18, 2010.

Live ammunition shots Another important moment of the revolution was the demonstrations that took place in early January in Kasserine and Thala, in the central-western part of the country. These demonstrations were suppressed with live ammunition, a rare act of violence [twenty people were shot dead, according to AFP]. The pictures were awful; one of them showed a protester with a cracked skull. Blogger Lina Ben Mhenni, one of our observers [who died on January 27, 2020 after a long illness, editor’s note], went to the scene to talk to the victims and their families.

Another prominent moment during these weeks’ uprising was January 12, 2011. For the first time, the army was sent out in Tunis, especially around the Jardin du Passage in the city center. Part of the population was very afraid that they did not know what the army would do – oppress or protect the citizens. In any case, people understood that the situation had escalated to a point of no return.

The day of Ben Ali’s departure on January 14, I was in Paris at FRANCE 24’s editorial office. It was frustrating not to be in Tunisia right now. However, it was very calm in Tunis, as the army had imposed a curfew on 15, 16 and 17 January. It was only later that the Tunisians began to go out and celebrate.

Especially on February 6, thousands of Tunisians living in major cities went to Sidi Bouzid to thank the city’s residents for triggering the revolution. It was a touching gesture.

Ten years later, there are still people who are nostalgic for the Ben Ali era. They claim that “it was better before” because of the order and security during Ben Ali’s reign and because socio – economic problems that Tunisia is experiencing today, such as unemployment, did not exist then. This is false. These problems existed at the time of Ben Ali, but we did not see them because the deposed president banned demonstrations and censored the media. Today, these problems are visible because every citizen has the right to demonstrate, express themselves in the media and film. This is what we call a democracy. “