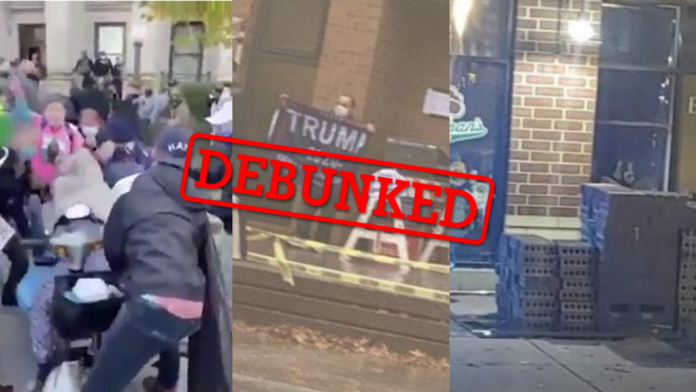 Allegations of “fake news” have flown thick and fast by 2020 in the U.S. election cycle, but journalists with fact-checking say election day was “quiet.” Supporters of Donald Trump and Joe Biden continued to share photos and videos that had been manipulated or taken out of context, but their posts were not widely shared.

JowharObservers teams and other fact-checkers monitoring social networks on election night found that most fake posts were not widely shared and were often reused from earlier in the year.

Several social media users shared a graphic showing a masked protester with a Molotov cocktail and the caption “Do not forget to disguise yourselves as patriots / Trump supporters.” The caption continued: “The media will think that there are Trump supporters who are rebelling, so it’s harder to turn popular opinion against us.”

The graphic was actually created in 2017, originally released on the page “Hickman County Antifa”. The author of the original post told the debunking site Snopes that she thought of the graphic as a joke and took it down as it began to go viral.

2 / A fight outside the polling station in North Carolina?

A video viewed more than 14,000 times on Facebook claimed to show a fight at a polling station in North Carolina. The caption read: “BLM / Antifa / Democrat THUGS is blocking votes and intimidating voters in North Carolina”.

The video was not filmed on election day. According to the Associated Press, it was filmed Oct. 31 at a gathering outside a courthouse in Graham, North Carolina, a block away from the polling station.

Pro-Biden accounts shared a photo showing a man with a “Trump 2020” flag. A post shared more than 2,600 times said in its original version that he was blocking access to a polling station in Clifton, New Jersey.

Clifton police told PolitiFact that the incident happened on November 1st. They said security footage showed the man depositing his vote in a ballot paper and then holding the flag up for about 40 seconds to take a picture.

4 / A wall around the White House?

Another photo shared by a pro-Biden account, this is shared more than 4,700 times, shows a high wall in front of the White House with the caption: “This is the final image of the Trump presidency.”

A reverse image search reveals that the image is a photo montage. In the original image, no wall is visible.

Protective fences were actually erected around the White House in the election up to the election, but not as high as the wall in the manipulated version.

Lafayette Square is much more fortified. They have cut through the park with another span of eight-foot metal fence in front of the Jackson statue, like the one that has stood for several months along H street.

Passerby mumbles, “This is not normal, none of this is normal.” pic.twitter.com/H7Zqt9mT8J

Tweet shows fences around the White House erected in the days before the election.

5 / Piles of bricks for rebel use?

Several posts, like the one below, showed a photo of a pile of bricks outside an ice cream shop in Illinois, an apparent reference to a frequent conspiracy theory that Black Lives Matter protesters store bricks to use as weapons. Independent fact-check Michael Thalen explained in a series of tweets that the bricks were actually used to build a patio for the restaurant next door.

Then I simply called the ice cream shop, explained the situation and asked them about the bricks.

They said the bricks were used by the restaurant next door, GIA MIA, to build a patio.

I was able to confirm this on the restaurant’s Facebook page https://t.co/0QaXfEKpAO pic.twitter.com/eCZARRQQZa

The brick-as-weapons theory has been shared in recent months along with captions saying they are meant to tempt angry protesters to commit violence.

Quiet before a storm of ‘fake news’? Some US fact-checking journalists said they were surprised to see so little misinformation being shared on election day.

I will not jinx it, but I just looked closely at the state of the most viral posts on Facebook and Instagram, and everything seems to be normal right now. Nothing misleading is going viral yet.

I’m shocked. Is that what others also see? #ElectionNight

However, other fact checkers warned that the flow of misinformation could be resumed. Daniel Funke of PolitiFact.com told Jowharobservers: We are concerned about a campaign that comes out in advance and says, ‘Oh, we have won the election’ when in fact it is not carried by the remaining votes or absent votes.

>> READ MORE: The top pieces of misinformation spread ahead of the US election