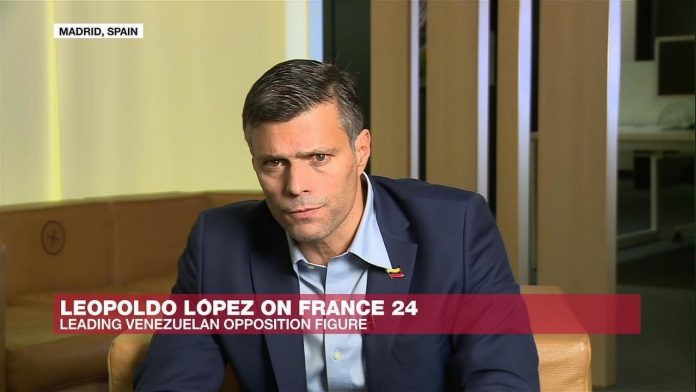 In an interview with FRANCE 24, the leading Venezuelan opposition figure Leopoldo Lopez declared that he left Venezuela for Spain last month after concluding that he could be “more effective in our fight against the dictatorship from exile”. He claimed that President Nicolas Maduro was still in power “because he is a brutal dictator” and “head of a criminal company”. Lopez demanded the imposition of international sanctions – especially from European countries such as France – against Maduro and other top officials.

Venezuelan opposition leader Leopoldo Lopez told Jowharthat he had decided to flee his country after years in prison and house arrest because he could not wage a political struggle under such conditions. He said he had fled the Spanish embassy in Caracas on his own and had not negotiated his resignation with Nicolas Maduro’s regime.

Lopez denied that his exodus was of political benefit to the regime and claimed that he could continue his advocacy from abroad and gather international support. He said the upcoming legislative election scheduled for December 6 was “a fraud” and that the opposition had decided to boycott them. He stressed that the opposition’s strategy was “regime change through free and fair elections”.

He denied allegations that he had tried to construct a coup back in April 2019 and claimed that it was a popular and quiet uprising that had simply not succeeded. Finally, Lopez called on the international community, especially Europe, to step up pressure on the Maduro regime through further sanctions against top Venezuelan officials, including Nicolas Maduro himself.