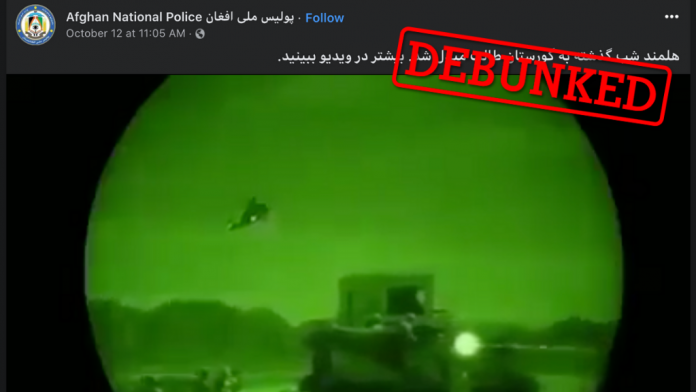 The conflict between the Afghan army and the Taliban in Helmand province in southern Afghanistan has intensified since 9 October. Both sides use social media to show what they perceive as their military successes. But it appears that Afghan police were a little too quick to post a specific video that they said showed the army beating Taliban positions. Turns out this video actually shows a workout done by the United States Marine Corps in Arizona, USA, in 2017.

The video, which was later picked up by several Afghan media outlets, was filmed in night vision mode and shows a helicopter bombing a compound. On the Facebook page of the Afghan National Police, the video received more than 20,000 views.

The version broadcast by RTA, the Afghan national television station, received more than 700,000 views. Afghan national police released this video along with the caption “Last night, Helmand was turned into a Taliban cemetery”. The video took more than 20,000 views. But in reality, this video is not recent and it was not filmed in Afghanistan. It was first published on the “airalimages” YouTube channel back in April 2017, and the caption says it shows the US Marine Corps engaging “targets during an urban near-air support exercise” in Yuma, Arizona, USA.

This is the original video that was uploaded to the YouTube channel ‘airalimages’ in 2017.

How can you find the original?

If you look closely at the video submitted by the Afghan police, you can see a watermark at the bottom right of the video that says “Airalimages”.

We searched for this name on YouTube and pulled up a channel that publishes military videos, most of which show the U.S. Army. Then we looked through the archives of this channel for a video filmed with night vision and found the exact same video that was published by the Afghan police and several media outlets.

The conflict between the Afghan army and the Taliban in Helmand province has displaced at least 35,000 people. The United Nations reported that “several civilians were killed, including women and children” in recent fighting.

Despite an agreement with the US government and ongoing peace talks between the Afghan government and the Taliban in Doha since September, the Taliban have refused to accept a ceasefire and are continuing their campaign in Afghanistan.

This article was written by Ershad Alijani