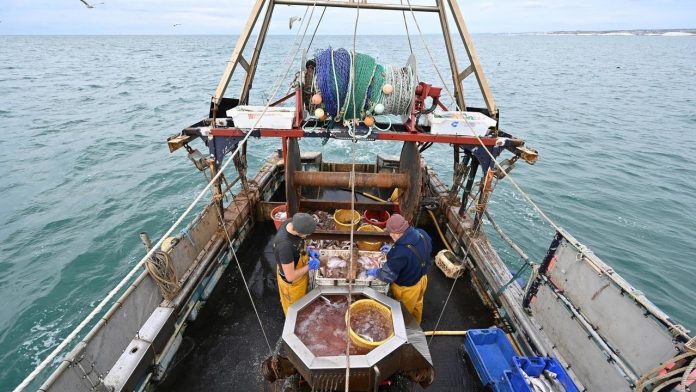 British and EU negotiators had dug into their heels and demanded more concessions from each other when post-Brexit trade talks dragged on Sunday, fasting on fishing rights.

Sources from both sides said that unless the other supported access to British waters, Britain would leave the single market at midnight on December 31 without a follow-up agreement on channel trading.

“We continue to try all possible ways to reach an agreement, but without a significant transition from the (European) Commission, we will leave on WTO terms on 31 December,” said a British government source.

But an EU diplomat told AFP that Brussels had made Britain its last offer of fishing and it was now up to British Prime Minister Boris Johnson to decide if he wanted a deal.

“If the UK does not accept the latest EU offer, there will be a ‘no deal’ on fish,” he warned. A European official said: “It is very blocked.”

The tough conversation came when both sides are involved in intense – and tense – negotiations to secure a pact before the end of the month. No agreement risks chaos at the EU – UK borders, where a rush before the deadline has already caused long truck backs.

However, observers noted that the fisheries issue was about finding the middle ground between supply and offer in an economically small sector, while the much larger second main issue of guaranteeing competition rules for fair trade is closer to settlement.

“It’s down to numbers,” said the European diplomat.

EU leader in the negotiations, Michel Barnier, has proposed to EU fishermen to give up almost a quarter of the value of the fish they currently catch in British waters. Britain is perceived to persevere to get back much more than half.

The United Kingdom has proposed that this compromise last for three years before it is renegotiated, while Europe is doubling it.

“We cannot accept an agreement that does not leave us in control of our own laws or waters,” said the British government source, arguing that the EU “continues to make demands that are incompatible with our independence”.

Fishermen sold down the river

EU fishermen fear losing all access to the rich fishing waters of Britain will threaten their livelihoods.

“We are in a hurry to be sold down the river,” the European Fisheries Alliance said in a statement, urging Barnier to stick to protecting them.

“The shape of a deal as it currently stands would be a huge blow to the European seafood sector, which consists of more than 18,000 fishermen and 3,500 vessels with an annual turnover of € 20.7 billion.”

The time is very short to agree.

The European Parliament has set a deadline at midnight (2300 GMT) on Sunday to get an agreement to review whether MEPs must ratify it before the end of the year.

Their parliamentary colleagues in the UK are on breaks, but can be recalled within 48 hours to do the same.

But EU capitals are not binding on the European Parliament’s deadline.

France’s European Affairs Minister Clement Beaune said talks would not be stopped if they dragged out Sunday night.

“We will not do that because what is at stake is entire sectors such as fishing, as sustainable competitive conditions for our companies,” he said.

The urgency of reaching an agreement is seen in long lines of trucks at the freight train connection through the Channel Tunnel when British companies are frantically storing.

A group of British MPs warned on Saturday that the UK has not installed the complex IT systems and port infrastructure needed to ensure smooth trade with the EU.

Some disruption is inevitable, not or not, with UK and European companies having to fill in import, health and tax forms to send and receive goods to each other.

An agreement would avoid tariffs, but there would still be traffic congestion when carrying out checks on lorries and driver’s papers.

Truck drivers’ lunches will also be examined: the British government warned packaged ham and cheese sandwiches from entering Europe under meat and dairy restrictions that apply to arrivals outside the EU.