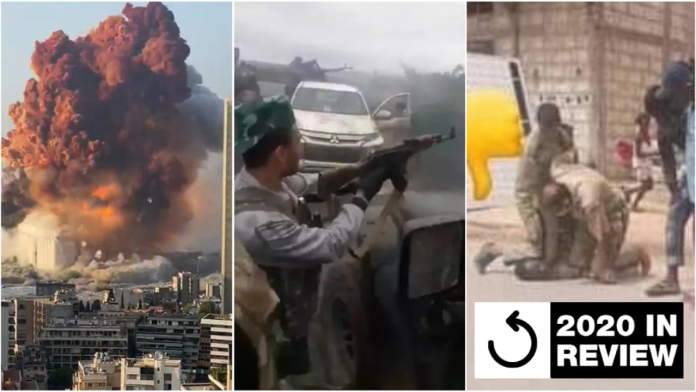 Although the year 2020 has been disrupted by the Covid-19 pandemic, other events have also affected the lives of our observers around the world. From Beirut to the United States to Nagorno-Karabakh, they have given us their testimony.

In Beirut, a giant explosion destroys everything in its path

On August 4, the world discovered these shocking images that began to spread on social networks.

A huge explosion struck the heart of Beirut, the Lebanese capital. A few days later, authorities counted 204 dead, more than 6,500 injured and billions of dollars in injuries.

During the hours and days following the disaster, medical services were overwhelmed by the need to treat both those injured in the blast and those infected with Covid-19. Our observers, the Lebanese medical staff, shared their experiences.

Read more about the observers >> Explosion in Beirut: hospitals overwhelmed in the distressed capital

In northern Mozambique, a conflict and its forgotten internally displaced persons

The situation in Mozambique also caught our attention. We were able to talk to the victims of the conflict between the authorities and an Islamic terrorist group in the far north of the country.

Our observers gave us many pictures documenting the consequences of the conflict for the local people, who were forced to flee.

The picture on the left shows a burned home in Cabo Delgado. The image on the right shows people fleeing Mocimboa da Praia, which was attacked by rebels on June 27. © Pinnacle News

Grasshoppers are invading Kenya and endangering the country’s food security

At the beginning of the year, an invasion of locusts caused great concern to Kenyan farmers and shepherds, who saw these insects devour everything in their path, which jeopardized the country’s food security.

In February, several Internet users posted pictures showing a particularly violent repatriation aboard a Turkish Airlines plane. An expelled man had been tied up with plastic wrap and had to be taken back to his homeland.

We examined these pictures and found the victim, a Cameroonian shoe dealer who had stopped in Istanbul on his way to Dubai.

Read more about the observers >> ‘They beat me up like a package’: A Cameroonian’s horrific expulsion from Turkey

Amateur videos confirm the presence of Syrian mercenaries in Nagorno-Karabakh

In October, the Caucasus region erupted when Azerbaijan declared war on Armenia over a territorial dispute. Both countries claim sovereignty over the Nagorno-Karabakh region.

Amateur videos, often taken by soldiers at the front and shared on private messaging channels, confirmed the presence of controversial mercenaries in the Azerbaijani ranks.

Syrian mercenaries exchange fire with Armenian soldiers in Nagorno-Karabakh in early October. In the center, a young Syrian is filming on the front line during a bombing near Horadiz. © Observers

Similarly, several videos have documented cases of vandalism against Armenian cultural heritage in the areas taken over by Azerbaijan.

On November 10, Azerbaijan finally declared victory in the more than month-long war.

On the African continent, there were many cases of police and military violence against civilians. In a 3-minute video filmed in January, Guinean police used a woman as a human shield when confronting young people during a demonstration.

Screengrab from a video from Guinea showing police officers apparently using a woman as a human shield. © Guinea Morale

We tried to find out more by geolocating the video and gathering testimonies from several witnesses. The images embody “a tradition of impunity for violations committed by security forces,” according to an Amnesty International researcher.

Dolphins that are victims of the oil spill on Mauritius’ beaches

On July 25, a Japanese bulk company, MV Wakashio, ran aground off Mauritius in the Indian Ocean, spilling nearly 1,000 tons of fuel oil. According to several of our observers on the island, this pollution had a direct impact on the marine fauna.

“When I came [on the beaches] yesterday morning there was a feeling of sadness and anger among the residents. In Petit Sable, oil spills were still very much present. A little further on, volunteers fished for a carcass. The animal had traces of fuel oil in its mouth, one of our observers told us.

In the United States, a civilian shoots at the crowd during a Black Lives Matter demonstration

After George Floyd’s death on May 25 in Minneapolis when he was arrested by police, the issues of police violence and racial discrimination returned to the forefront and sparked a wave of protests in the United States.

When Jacob Blake was paralyzed after a police shooting in the town of Kenosha, demonstrations were organized in the ongoing “Black Lives Matter” movement. During one of them, a teenager, allegedly a member of a self-defense environment, shot into the audience. Two people were killed and one seriously injured.

Left: Kyle Rittenhouse has been arrested for shooting during a protest against Kenosha, Wisconsin on August 25. Right: Armed civilians protect a gas station from looting the third night of protests on August 25. © Twitter

Our observer regularly attended the demonstrations and witnessed the scene. He told me what he saw.

Read more about the observers >> Eyewitness to shooting in Wisconsin: ‘He came with a gun and picked up fights’

The wave of outrage over George Floyd’s death quickly crossed American borders and gave weight to many anti-racist battles. In Mauritania, the brutal arrest of a black man in June showed the same “technology” used by the Minneapolis police.

Two Mauritanian police officers hold a black man on the ground with his face down. One of the officers has his knee pressed into the man’s neck, which compares with the police murder of George Floyd in the United States. © Facebook

These shocking images, a Mauritanian echo of international news, raised awareness of the discrimination suffered by the black community in this country and that the system of slavery sometimes still affects them.

At the border between Iran and Afghanistan, dozens of migrants drowned by border guards

In May, our team investigated a case of human rights violations by law enforcement officials. In a series of amateur videos broadcast in Afghanistan, we see several bodies washed up on a river bed.

Amateur videos circulating on social media in Afghanistan show the bodies of Afghan migrants drowned in the Harirud River on the border with Iran on May 1, 2020. Survivors say they were forced into the river by Iranian border guards. © Observers

These photos show an incident that occurred on April 30 at the border between Iran and Afghanistan. Several Afghan workers who wanted to return to Iran during a silence in the Covid-19 pandemic were ordered to return to Afghanistan by border guards.

According to the survivors, these Iranian officers threatened to kill them if they did not swim across the river. At least 17 of the 57 migrants died of drowning and 20 were reported missing.

Read more about the observers >> Survey: videos reveal the site of mass drowning at the border between Iran and Afghanistan