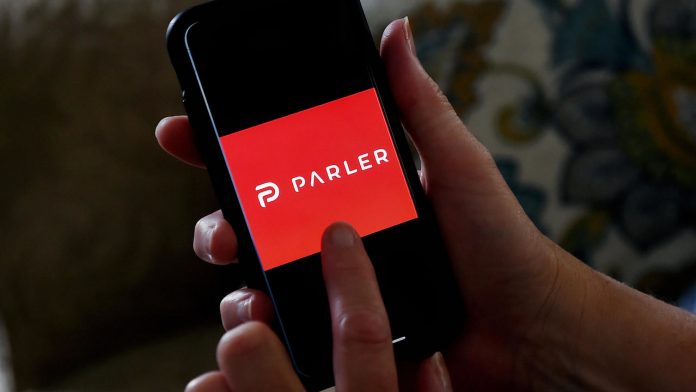 Amazon will suspend Parler, the tech giant confirmed on Saturday, sending the social media network offline after it was banned by Apple and Google for allowing “threats of violence” in the wake of a deadly riot in the US capital.

Parliament’s social networks have become a haven for conservatives who say they have been censored by other social media platforms.

It had grown in popularity in recent months and became the free app 1 on the Apple App Store on Saturday after the much larger Twitter decided to permanently ban US President Trump from his platform for his role in encouraging violence at the Capitol .

Announcements of support for Wednesday’s rioters and talks of new demonstrations had flourished on the platform, leading Google to remove it from its app store on Friday, followed by Apple on Saturday.

Amazon then moved to wipe it from its cloud hosted by Amazon Web Services and pushed it completely offline.

In a letter to Parler first published by Buzzfeed, Amazon said that the network did not act quickly enough against violent content on the platform.

“We have seen a steady increase in this violent content on your site, all of which violate our Terms of Use,” said the letter, whose content was confirmed to AFP by Amazon.

Given the riot at the Capitol this week, the letter continued, there was a “serious risk that this type of content will further stimulate violence.”

It shuts down the account just before midnight Pacific Standard Time on Sunday (0759 GMT Monday).

Since the group hosts Parler’s data on its cloud service, this should prevent it from working, at least temporarily.

The founder of Parler, John Matze, confirmed on his profile that there was a possibility that the network would not be available “for up to a week” when looking for a new host.

“We will do our best to move to a new supplier right now,” he said.

Amazon’s decision has a much more far-reaching impact than Google and Apple.

They had made it more complicated to download the Parler app, but users could still access it if it was already downloaded or if they were using a web browser.

“We have always supported various views represented in the App Store, but there is no place on our platform for threats of violence and illegal activity,” Apple said in a statement on Saturday.

“Parler has not taken sufficient steps to address the spread of these threats to human safety. We have suspended Parler from the App Store until they resolve these issues.”

Google withdrew Parler from its app store for allowing “gross content” that could incite lethal violence like that seen at the Capitol.

Other common social media networks such as Facebook, Instagram, Snapchat and Twitch have also suspended Trump after the attack on the Capitol.

Matze has said that the platform has “many options” to move forward.

Parler started in 2018 and was originally a home for the far right, but now it attracts more traditional conservative voices including Republican lawmakers.