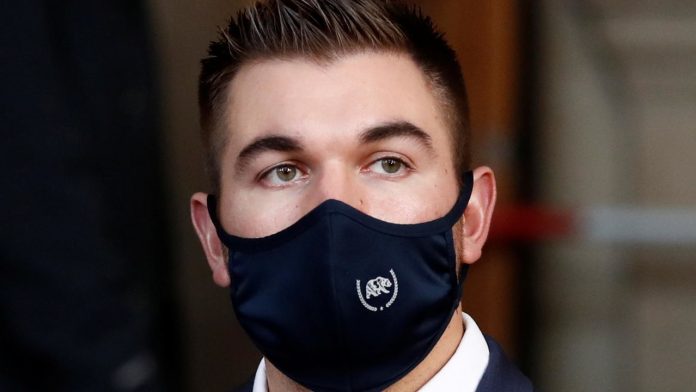 One in three Americans who were hailed as heroes for dealing with an alleged mastermind of the Islamic State aboard a Paris-bound train testified at the man’s trial on Friday that he tried to kill him.

Alek Skarlatos told the Paris court that he pulled a pistol from the attacker’s hand, turned on him and pulled the trigger, but that the pistol did not fire.

“I honestly tried my best to kill or restrain him,” Skarlatos said.

The suspected attack, Ayoub El Khazzani, faces a maximum life sentence in prison if convicted of terrorist murder. The 31-year-old Moroccan is being tried with three suspected criminals.

The memories in court this week of passengers disarming the attacker on the train from Amsterdam have highlighted the two-second decision that destroyed what could have been a massacre. Passenger Heroism on August 21, 2015 inspired Clint Eastwood to direct a Hollywood film that replayed the dramatic events: “15:17 to Paris.”

Skarlatos and two other longtime friends vacationed together. They grew up together in California. One of the friends, Spencer Stone, managed to trap the attacker in a stranglehold. Skarlatos also moved in with another passenger when the shooter was on the ground.

He “was surprisingly difficult to control,” Skarlatos testified.

With the attacker under control, the train was redirected to Arras, in northern France, where El Khazzani was arrested.

Authorities say El Khazzani boarded the train in Brussels armed with Kalashnikov, nine clips with 30 rounds each, an automatic pistol and a cutter.

Once on board the train, El Khazzani lingered in a toilet between cars, where two other passengers confronted him and then appeared shirtless with their weapons.