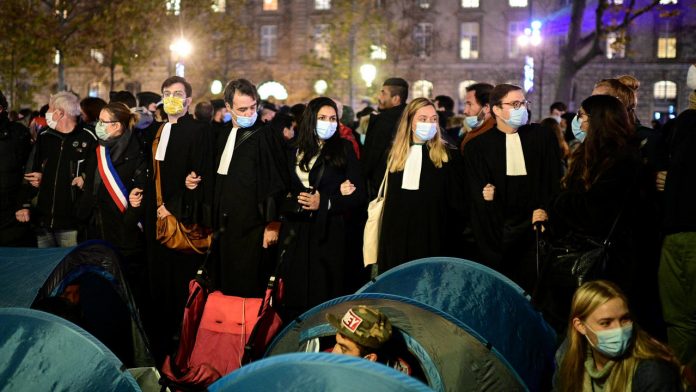 French police on Tuesday faced charges of “scandalous” use of excessive force after firing tear gas to disperse a camp of homeless migrants in Paris.

Interior Minister Gerald Darmanin acknowledged that images showing the approval late on Monday were “shocking” and asked the city’s police chief to submit a report.

The government is already facing a storm of criticism over a new security law that opponents say will erode police responsibility.

Officers used tear gas to dismantle the Paris camp, which was set up to protest previously forced evacuations of hundreds of migrants from other camps.

Time and time again, the police dismantle camps and confiscate #migrants’ tents, knowing that they have no alternative accommodation. Usually it is in Calais or on the outskirts of Paris. This time: on the Place de la République. With more eyes looking at – and condemning politics – will it change? https://t.co/yggzCf3izs

Volunteers had helped set up about 500 blue tents in Republic Square that were quickly filled with migrants, the majority from Afghanistan.

Police arrived shortly afterwards to remove the tents, sometimes with people still inside, amid protests from migrants and taunts from activists.

“They are too violent,” said Shahbuddin, a 34-year-old Afghan who cried after being thrown out. “We just want a roof.”

Police later used tear gas and harsh tactics, with videos posted on social media showing an officer tripping over a man as he ran and another officer slamming into a man trying to intervene.

The controversy comes a week after migrants were evacuated from temporary shelters in the northern suburb of Saint-Denis, including some who received alternative shelter.

“The state has made a deplorable show,” Ian Brossat, a Paris mayor responsible for housing, told AFP.

“People are occupying a square peacefully with tents, simply because they have a housing problem, they are not harming anyone. And there is this intervention that is completely disproportionate,” he said.

Darmanin said he had asked for a report from Paris Police Chief Didier Lallement at noon and would make a decision based on its results.

“Some images of the spread of the illegal migration camp in Republic Square are shocking,” he wrote on Twitter.

Some pictures of the dispersal of the illicit camp campsite of the Republic are shocking. I have just requested a report on the reality of the facts from the Prefect of Police today at noon. I will make the decisions of his reception.

“Did not vote for this”

Paris is an important stop on the European migration route with thousands passing, often en route to England.

Camps repeatedly arise around the city to be demolished by the police.

The latest removal from the camp came as the government pushed a security law through parliament that would restrict the publication of photos or videos of police faces – the lower house will vote on it later on Tuesday.

The media association says that it can give the police the green light to prevent journalists from doing their job and possibly document abuse.

President Emmanuel Macron swept to power in 2017 as a centrist who garnered support from across the political spectrum. But critics and even some supporters accuse him of leaning to the right as he seeks re-election in 2022.

A group of public figures who voted for him in 2017 wrote an open letter this week demanding that the legislation be withdrawn.

“Mr President, we did not vote in favor of this.”