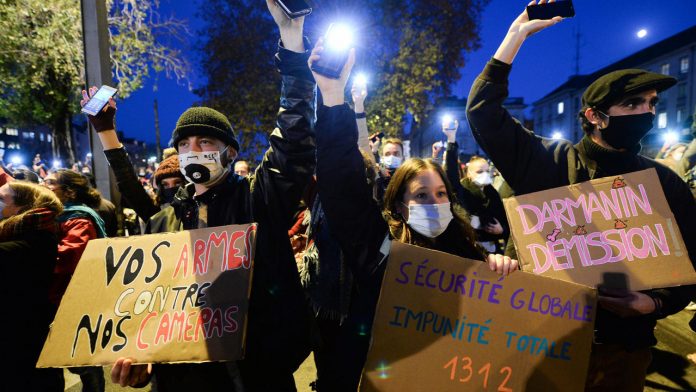 Dozens of rallies are planned for Saturday against a proposed French law that critics say will undermine the media’s ability to scrutinize police behavior, with the country shaken by images showing officers beating and racially abusing a black man.

French President Emmanuel Macron said on Friday that images of police beating a black music producer in Paris put “shame” on the country, with top politicians and athletes expressing outrage over the incident.

The fall, which comes on the heels of a violent evacuation of migrants in central Paris, has shocked the nation and galvanized opponents of the government’s controversial new security law.

One of the most controversial parts of the proposed law is Article 24, which would criminalize the publication of pictures of police officers on duty with the intention of harming their “physical or mental integrity”.

It was adopted by the National Assembly last week – although it is awaiting Senate approval – provoking protests and condemnation from media organizations across France.

The rally organizers demand that the article be withdrawn and claim that it violates “the fundamental freedoms of our republic”.

Trade unions are expected to join the demonstrations, with members of the Yellow West – whose sometimes violent protests in 2018 and 2019 shook the country – also expected.

In Paris, government officials had ordered the organizers to limit the meeting to a single venue, but the order was revoked by judges who approved a march.

And in a sign that the government could prepare to go back, Prime Minister Jean Castex announced on Friday that he would appoint a commission to reformulate Article 24.

According to the article, criminals can be sentenced to up to one year in prison and fined 45,000 euros (53,000 dollars) for sharing photos of police officers.

The government says the provision is intended to protect officials from doxxing and online abuse, but critics say it is further evidence of the Macron administration’s sliding to the right.

The media association says it can give the police the green light to prevent journalists – and users of social media – from documenting abuse.

They point to the case of music producer Michel Zecler, whose racial abuse and assault by the police was recorded by CCTV and later published online, which provoked widespread criticism of the officers’ actions.

In another case, journalists on the ground at a French migrant camp witnessed and registered police brutality on Monday when the Paris area was cleared.

The events have increased the pressure on Interior Minister Gérald Darmanin and raised questions about the future of Paris Police Chief Didier Lallement.

In an interview with France 2-TV on Thursday, Darmanin said that the officers involved in Zecler’s assault “had soiled the republic’s uniform”.

Macron has held talks with Darmanin to demand harsh punishment for those involved in the beatings, a government source said.

>> Police work without consent: Why French police are ill-equipped to “retake” Paris suburbs

Protests over police brutality have already taken place elsewhere in the country before Saturday.

Protesters took to the streets of Toulouse on Friday night, waving placards like “police everywhere, justice nowhere”. In Nantes, police said about 3,500 gathered, while organizers put the crowd at 6,000-7,000.

The condemnation has spread on social media after Zecler’s beatings, with top footballers such as Kylian Mbappé joining his French national team mates and other athletes to stop racism.

“Unbearable video, unacceptable violence,” Mbappé wrote on Twitter next to a picture of the injured producer, “Say no to racism.”