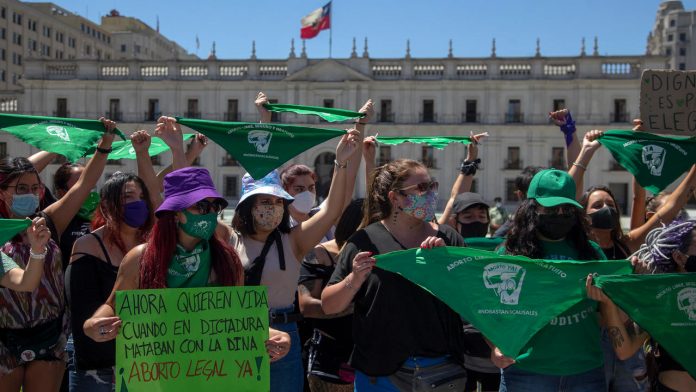 Argentina became one of only a handful of Latin American countries on Thursday to allow abortion, when neighboring Chile began its own debate on the decriminalization of a procedure denied to most women on the continent.

President Alberto Fernandez signed a law allowing abortion up to 14 weeks’ pregnancy, adopted by the Senate on December 30.

“Today we have a better and more equal society,” Fernandez said, speaking at an event at a museum in the capital, Buenos Aires.

“This is a big step towards equal rights, which gives women the opportunity to decide.”

Fernandez added that it was “the culmination of a long struggle” waged by those who wanted an end to abortion as “a crime that forces secrecy and exposure to the risks involved” in back street proceedings.

The government estimates that more than 3,000 women have died since 1983 from more than half a million secret abortions performed in the country of 44 million.

Congress approved the bill last month, with the support of women’s advocates, despite strong opposition from evangelical Christians and traditional Roman Catholics and disapproval from Pope Francis.

As a result, Argentina will be the largest of only four Latin American countries where women can choose to have an abortion and join Cuba, Uruguay and Guyana.

In Mexico, redundancies are only allowed in the state of Oaxaca and in Mexico City.

The region has some of the world’s most restrictive abortion laws. In El Salvador, Honduras and Nicaragua, the procedure is prohibited and women can be sent to prison even for miscarriage.

In Argentina, dismissals were only allowed if the pregnancy was the result of rape or endangered the woman’s life.

Between 2012 and 2020, more than 1,500 court cases for abortions were brought, according to the Center for Legal and Social Studies.

The law “represents the state’s understanding of what reproductive autonomy means for women,” Maria Teresa Bosio, president of a group of Catholics in favor of the right to vote, told AFP.

The law allows health care professionals to express conscientiousness, but says the abortion must be provided free of charge within ten days of a request.

Fernandez also issued a 1,000-day guarantee that women will receive state support during pregnancy and during their baby’s first three years.

“There will be a condition behind (women) that will give them care and guarantees so that their children can grow and develop,” says Fernandez.

Chile also currently restricts abortion to rape cases or when a woman’s life is endangered, along with the inability of the fetus. Until as recently as 2017, the country banned the procedure directly.

Women there took to the streets of Santiago on Wednesday to demand access to abortion when the debate began in the Chilean Congress on a bill aimed at allowing optional abortions to 14 weeks’ pregnancy.

The protesters wore green scarves like those worn by their counterparts in Argentina and elsewhere in Latin America and collected for women’s reproduction rights.

The women also performed “A Rapist in your Path”, a song that has become a global anthem against sexual violence.