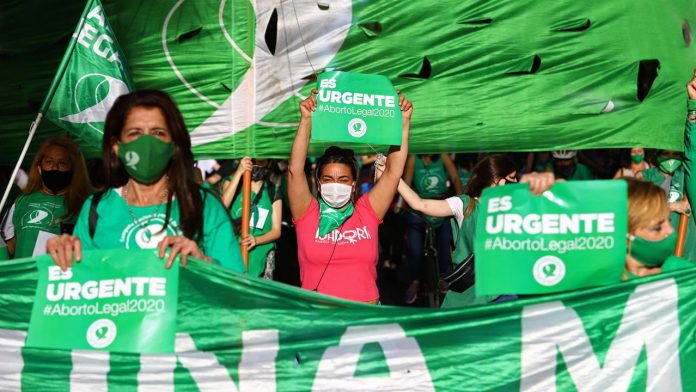 Argentine President Alberto Fernandez announced on Tuesday that he had brought a new bill on the legalization of abortion to Congress and resumed a debate that has bitterly divided the traditional Catholic South American nation.

The announcement sparked celebration among thousands of people outside the congress building in support of a plan to impose extra taxes on the rich to subsidize Argentina’s creaking health care system.

Fernandez announced in a video message on his Twitter account that the bill would ensure “that all women have access to the right to comprehensive health care.”

Argentine society is deeply divided over the issue of abortion.

After years of demonstrations, Congress began a historic debate in 2018 under then-President Mauricio Macri, which ended with MPs in the House voting to legalize abortion, only for the Senate to reject it.

Fernandez promised in March to present a new bill to legalize abortion, but it was put on standby when the country went into lockdown over the coronavirus.

Fernandez, who fired Macri in last year’s election, said a separate bill would help poorer families avoid having to resort to abortion for economic reasons.

It would provide “an insurance policy of 1000 days, with the aim of strengthening comprehensive care during pregnancy and for children during the first years of life.”

In Pope Francis’ homeland, abortion can be punished with up to four years in prison, and only allowed in rape or if there is a risk to the mother’s life.

Lawmakers began debating on Tuesday the introduction of a two percent tax on more than 9,000 of Argentina’s largest fortunes, which is expected to provide more than $ 3 billion in care and other projects to help families affected by the Covid-19 crisis.

Argentina has more than 1.3 million coronavirus infections and more than 35,000 deaths from the disease.