Home World Armenia is asking for Russia’s help after no new ceasefire in the...
Facebook
Twitter
WhatsApp
Linkedin
LINE 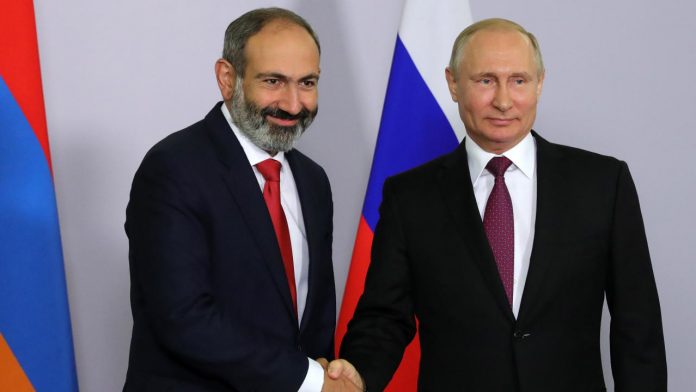 The order, which further raises the prospect of an escalation in the conflict, came after Armenia and Azerbaijan failed to agree on a new ceasefire in the Nagorno-Karabakh conflict during talks in Geneva on Friday.

Russia has a military base in Armenia and has a defense treaty with Yerevan.

“The Prime Minister of Armenia has asked the Russian President to enter into urgent consultations with a view to determining the type and amount of support that the Russian Federation may provide to Armenia to ensure its security,” the ministry said in a statement.

Azerbaijan and Armenia have been locked in a bitter conflict over Karabakh since Armenian separatists backed by Yerevan seized control of the mountainous province in a 1990s war that left 30,000 people dead.

The current clashes erupted on September 27, and fighting has persisted despite repeated international attempts to secure a ceasefire.

Russia has previously said that its defense pact with Armenia does not extend to the erupted Nagorno-Karabakh region.

But Pashinyan said in his letter to Putin that the hostilities were getting closer to Armenia’s borders and reiterated that Azerbaijan’s ally Turkey supported Baku, according to the statement.

He called for Moscow’s help by invoking the two countries’ close ties and a 1997 treaty on friendship, cooperation and mutual assistance.

The warring parties have three times agreed on a ceasefire during talks mediated by Russia, France and the United States, but the trucers have all quickly fallen apart.

More than 1,200 people from both sides have been reported dead since the fighting began, but the actual death toll is believed to be significantly higher.