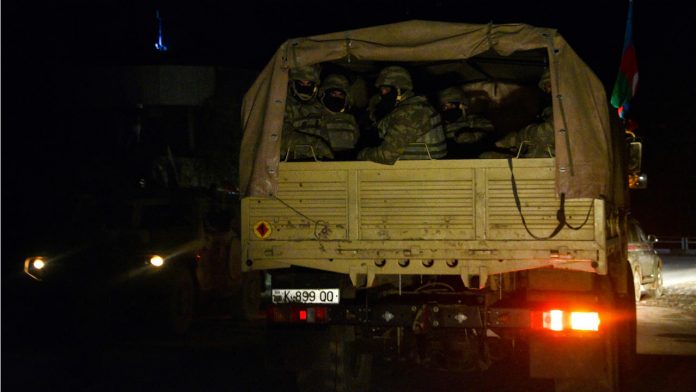 On Tuesday, Azerbaijani forces moved into the last district surrendered by Armenia in a peace deal that ended weeks of fighting over the disputed Nagorno-Karabakh region.

Azerbaijan’s Ministry of Defense released a video showing a tank carrying an Azerbaijani flag leading a column of trucks into the Lachin district.

AFP journalists in the city of Lachin saw a column of Azerbaijani trucks flanked by military vehicles from Russia, which mediated the peace deal.

Armenia agreed to hand over three districts around Karabakh – Aghdam, Lachin and Kalbajar – as part of the deal that halted an Azerbaijani offensive that had recaptured territories lost to Armenian separatists in a war in the 1990s.

As in Aghdam and Kalbajar, the inhabitants of Lachin frantically cleared before handing over and took cattle, firewood, furniture and even plastic pipes.

Some residents have burned their homes when they left and on Monday night, two houses on the outskirts of the town of Lachin were on fire.

Local official Davit Davtyan said residents had been allowed to leave until 6pm, except for those allowed to stay along the Lachin corridor leading to Armenia’s border.

The peace agreement placed about 2,000 Russian peacekeepers between the two sides and along the corridor, a 60-kilometer route through Lachin that connects Karabakh’s capital Stepanakert with Armenia.

Davtyan said about 200 people would be allowed to stay to maintain local infrastructure.

“Residents who could not leave because they had nowhere to go said they would stay and see what happens on Tuesday,” he said.

Nagorno-Karabakh broke away from Azerbaijan’s control in a war following the collapse of the Soviet Union in 1991 that left some 30,000 dead.

The region declared independence but was never recognized by any country, including Armenia, which strongly supports the separatists.

The peace agreement signed on November 9 was reached after six weeks of fighting that saw Azerbaijan’s army overwhelm separatist forces and threaten to advance on Stepanakert.

Under the agreement, Armenia will lose control of seven districts it seized around Karabakh in the 1990s – many Azerbaijanis who were forced to flee are now planning to return.

The separatists retain control of most of Karabakh’s Soviet – era territory but have lost the key city of Shusha.

While some Armenians have fled from the districts that were bred to Azerbaijan, others in Lachin had nowhere to go.

In the village of Aghavno along the Lachin corridor, 60-year-old Araksya Gyokchakyan saw residents loading furniture and firewood into cars and trucks even as she was about to stay.

“I do not know where to go. I stayed here during the war. It is my home,” she told AFP.

Meanwhile, other Armenians have returned to Karabakh itself.

Russia’s defense ministry, which is helping with the return, said on Monday that more than 25,000 people who had fled the fighting had been returned.

Moscow’s peacekeeping role has overshadowed France and the United States – the three countries that make up the Minsk group, which led talks on the Karabakh conflict for decades but failed to reach a lasting agreement.

France’s position in future negotiations could be further threatened after Azerbaijani lawmakers last week demanded that the country be expelled from the Minsk group.

The move came after the French Senate passed a non-binding resolution calling on France to recognize Karabakh as an independent state.

Azerbaijan has also called on its loyal ally Turkey to play a role in peacekeeping missions, but Moscow insists Ankara will not be involved.

Since the announcement of the peace agreement – which leaves Karabakh’s future political status in limbo – Armenia’s Prime Minister Nikol Pashinyan has been under fire at home.

Protesters have regularly taken to the streets of the capital Yerevan, branding him a “traitor” for agreeing to the deal and demanding his resignation.

Protesters gathered again on Monday, even outside the French embassy in Yerevan, begging for help in finding soldiers still missing after the fighting.

While Armenia has reported more than 2,300 military deaths, which is considered an underestimation, Azerbaijan has not revealed any military losses.

More than 100 civilians were reported killed on both sides.