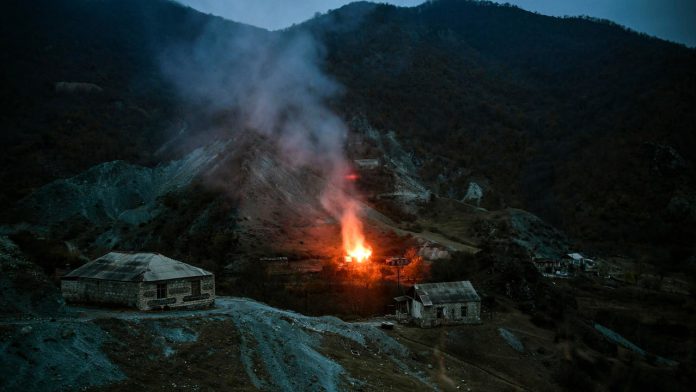 Azerbaijani soldiers and military trucks rolled into the Kalbajar district on Wednesday, recapturing the second of three regions that Armenia is returning under an agreement that ended weeks of fighting.

Pictures released by the Azerbaijani Defense Ministry showed that troops entered the district overnight, some scanning for landmines on snow-covered roads.

The district is among those surrendered by Armenia after agreeing to a peace deal that ended six weeks of conflict over the disputed Nagorno-Karabakh region.

Kalbajar, divided between Karabakh and Armenian territory, was originally scheduled for surrender on November 15, but Azerbaijan withdrew the deadline for humanitarian reasons.

Armenia agreed to return three districts around Karabakh – Aghdam, Kalbajar and Lachin – as part of the deal that halted an Azerbaijani offensive that had recaptured territories lost to Armenian separatists in a war in the 1990s.

Aghdam resigned on November 20 and Lachin must be handed over by December 1.

Near the village of Cherektar on the outskirts of Kalbajar, Armenian soldiers set up a checkpoint with piles of tires blocking the road.

With a Kalashnikov rifle and a white cross drawn on the front of his camouflage uniform, 20-year-old soldier Armen Shakhnazaryan said it was a shame for Armenia to lose the district.

“We have many churches here,” Shakhnazaryan told AFP. “Our ancestors, our elders and our friends are buried here.”

In a televised speech on Wednesday, Azerbaijani President Ilham Aliyev congratulated his people and said that Kalbajar had been “liberated”.

He said that historical monuments in the district, including churches and mosques, were considered “historical treasures” by mainly Muslim Azerbaijan and should be preserved.

Azerbaijanis who fled the region almost 30 years ago are expected to return when the Armenians leave en masse.

In the days before the surrender, the inhabitants of Kalbajar packed everything they could take, determined to leave nothing to their long-term enemies.

Locals collected electrical cables, charged parts of a hydroelectric power plant in a truck and even felled trees to take with them when they left.

But 22-year-old Gevorg Vanyan – who works at a petrol station in the village of Getavan in a district bordering Kalbajar – said he would not leave even if it was “very dangerous” to stay.

“Never in my life could I imagine that life could change like this … But we have lived here and will live here,” Vanyan told AFP.

Conflicts between the former Soviet rivals over Nagorno-Karabakh broke out in late September, sparking a far-flung conflict over the mountainous region.

The ethnic Armenian enclave broke away from Azerbaijan control during the 1990s war and declared independence, although this was never internationally recognized.

The peace deal was reached after Azerbaijan’s military overwhelmed Armenian separatist forces and threatened to advance on Karabakh’s capital, Stepanakert.

Under the agreement, Armenia would lose control of seven districts seized during the post-Soviet war in the 1990s, killing 30,000 people and displacing many Azerbaijani people who used to live there.

The separatists retain control of most of Karabakh’s Soviet – era territory and some 2,000 Russian peacekeepers have been stationed along front lines and to protect the Lachin Corridor, which connects Karabakh with Armenia.

Other Armenians have meanwhile returned to Karabakh itself.

Russia said on Wednesday it had helped more than 15,000 people return from Armenia after fleeing the fighting, leaving thousands dead, including more than 100 civilians.

Moscow’s role in stopping the fighting has stolen the spotlight from France and the United States, which, together with Russia, form the so-called Minsk group of negotiators who mediated an unstable ceasefire in the 1990s.

The three countries attempted three separate ceasefires during the recent conflict, all of which collapsed when Armenia and Azerbaijan accused each other of violations.

Azerbaijan’s public prosecutor said on Wednesday that the country was investigating allegations of war crimes against both sides.

Videos circulated on social media during the fighting, which reportedly showed the executions of Armenian prisoners of war by Azerbaijani troops and Armenian soldiers who defiled the bodies of Azerbaijani soldiers.

“There are a lot of fake videos. But we must honestly say that there are also videos that can be real, Kamran Aliyev told AFP in an interview. “Azerbaijan is a law-based state and we respond to such facts.”