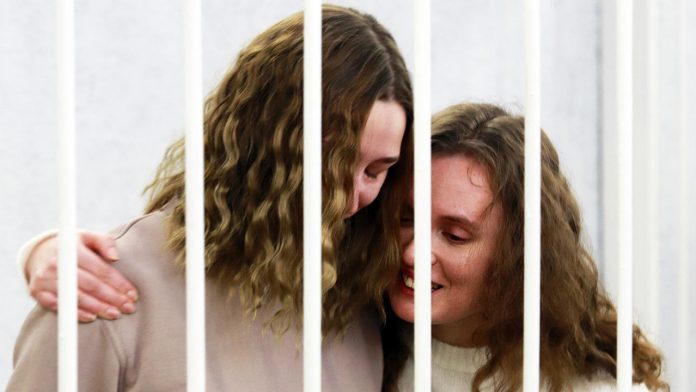 A court in Belarus on Thursday sentenced a couple of TV journalists to two years in prison for covering a protest last year, the first long prison term in a legal assault on independent news media.

Standing defiantly in a cage, Katerina Bakhvalova, 27, and Daria Chultsova, 23, V blinked for victory as they smiled and blew kisses to the courtroom before the verdict.

The two women were arrested in November while filming one of the anti-government rallies sweeping Belarus after strongman Alexander Lukashenko claimed victory in an August election that the opposition said was rigged.

The women, who denied their guilt on the first day of the trial earlier this month, were accused of “enticing people to attend a mass event” via their broadcast and were convicted of leading “group actions that grossly violate public order”.

The exiled opposition leader Svetlana Tikhanovskaya praised the two journalists for their opposition after the verdict.

“I know we will not live in a cage. We will achieve truth and freedom – thanks to Ekaterina Andreyeva, Daria Chultsova, all honest journalists, “she wrote on her Telegram channel with Bakhvalova’s pen name.

The case has given rise to widespread condemnation from Western countries and advocates.

The United States condemned the renewed force and said it had imposed visa restrictions on another 43 Belarusian officials and other people considered to be suppressing democracy.

“We stand with the brave people of Belarus and support their right to free and fair elections,” said Foreign Minister Antony Blinken in a statement.

The president of neighboring Poland demanded amnesty in Belarus, while EU foreign policy spokesman Peter Stano said the bloc was “condemning” the prison sentence, which he called a continuation of a “shameful disruption of the media.”

After the protests broke out last year, the Belarusian authorities released a powerful force that left at least four dead and thousands in prison.

Bakhvalova and Chultsova, who work for the Polish-based TV channel Belsat, were arrested while filming a demonstration in November in support of a protester who the opposition believes died at the hands of Lukashenko’s security services.

“I showed these events live. For this I was thrown in jail for inflated charges, “Belsat reported that Bakhvalova told the judge on Wednesday in her final statement before she was sentenced.

“It is an absurd situation because the journalists only covered the protest,” her lawyer told reporters after the decision outside the court in the Belarusian capital Minsk.

Investigators later said he showed signs of intoxication, but independent Belarusian media quoted a doctor as saying that no alcohol had been found in his system.

The journalist who published the story, Katerina Borisevich, and the doctor, Artyom Sorokin, were soon arrested on charges of “revealing medical secrets, which had serious consequences”. They will be put on trial on Friday.

The prosecutor’s office said in a statement on Thursday that it had initiated a criminal case against Bondarenko’s death.

As the demonstrations subside, the authorities continue a number of criminal cases against activists and the press.

Eleven journalists are currently being held in connection with the protests, according to the Independent Belarusian Journalists’ Association (BAJ).

On Wednesday, a trial was also opened against the leading opposition leader Viktor Babaryko, who was arrested before the presidential election after announcing that he would run against Lukashenko.

The former banker was one of several opposition figures arrested or fled the country.

Several Western leaders have refused to recognize the election results, and the European Union has imposed sanctions on Lukashenko and his allies.

But Lukashenko continues to gain Moscow support and the Kremlin said Thursday that Russian President Vladimir Putin would meet with him next week.