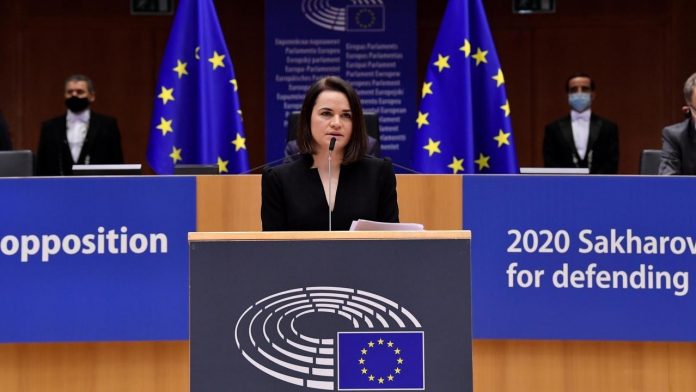 Belarusian opposition leader Svetlana Tikhanovskaya promised on Wednesday that the protest movement against Alexander Lukashenko’s regime would prevail despite a brutal attack by the Minsk authorities, as she received the EU’s highest rights award.

“We have to win and we will win,” said the exiled former presidential candidate in Brussels, accepting the Sakharov Prize on behalf of the opposition movement.

Belarus has been gripped by four months of unprecedented anti-government protests that erupted after a controversial presidential election in August, in which Lukashenko claimed a sixth term.

His opponent says the votes were rigged and that the political novice Tikhanovskaya, who ran instead of his imprisoned husband, was the real winner.

“I have only one wish this year, I want every Belarusian who is now in prison or forced to live in exile to return home,” Tikhanovskaya, who is currently based in Lithuania, told the European Parliament.

Tikhanovskaya demanded a tougher response from Europe against Lukashenko’s regime, as the strongman clings to power after more than a quarter of a century in charge.

“We urge Europe to be more courageous in its decisions and to support the people of Belarus now – not tomorrow and not sometime in the future,” Tikhanovskaya said. “It’s actions that matter.”

The EU has sanctioned more than 50 officials, including Lukashenko and his son, and European ambassadors in Brussels on Wednesday agreed to add more names to the blacklist.