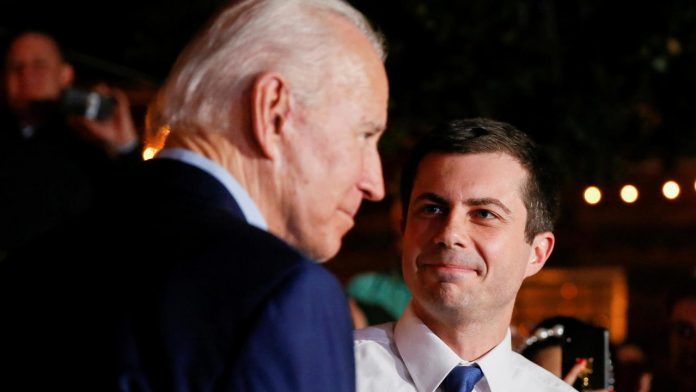 Elected President Joe Biden on Tuesday announced Pete Buttigieg as his candidate to head the US Department of Transportation, making him the first of Biden’s democratic rivals for the presidency to have a role in his cabinet.

The appointment of Buttigieg, 38, is another step in a meteoric political rise for the former mayor of South Bend, Indiana, who showed surprising strength as a presidential candidate. If confirmed by the US Senate, he would run a sprawling federal agency that oversees the country’s airlines, highways and transit systems.

Buttigieg would also make history as the first openly LGBTQ secretary of state to be approved by the Senate.

“I nominate him as Transport Secretary because this position stands in the interplay between so many of the related challenges and opportunities ahead of us,” Biden said in a statement. “Jobs, infrastructure, equity and climate coincide at DOT, the site of some of our most ambitious plans to rebuild better.”

Buttigieg had been rumored to be in several different positions in Biden’s administration. He was surprisingly competitive during the Democratic presidential race, won the first-in-nation election rallies in Iowa, showed a formidable fundraising power, and enjoyed massive popularity on social media.

When Biden took control of the race after winning the South Carolina primary in February, Buttigieg quickly dropped out and approved him, helping Biden consolidate support from the party’s moderate, established wing. He became an esteemed Biden supporter on TV during the last weeks of the election.

The Human Rights Campaign, the country’s largest advocate group for the LGBTQ community, praised the nomination, saying Buttigieg “was open and honest” about his identity and gave a voice to the community.

“His vote as a master of the LGBTQ community in the Cabinet Room will help President-elect Biden build our nation better, stronger and more equitable than ever before,” Alphonso David, President of the Group, said in a statement.

Although he is seen as a growing star within the party, Buttigieg’s potential nomination for a cabinet post has been opposed by a number of progressive groups and black leaders who have criticized his record of civil rights.

During the Democratic race, Buttigieg faced attacks from African-American activists, who claimed he was not doing enough as mayor to fight systemic racism in South Bend and help black residents participate in the city’s economic revival.

He was also criticized for killing a black man by a white police officer in South Bend, as well as questions about diversity in the city’s police force.

The best transport job gives him a chance to confront the nation’s history of plowing highways through disadvantaged neighborhoods, and what advocates say is the lasting social, economic and environmental consequences of doing so.

At 78, Biden will be the oldest person to hold the presidency in US history, leading to speculation that he will only serve one term.

While Kamala Harris, Biden’s vice president, may be the leading challenger to succeed him, Buttigieg’s transport post will allow him to travel to communities across the country and remain in public – something that could support a future presidential run.

Biden has seemed largely concerned by liberal complaints about appointments to his administration, preferring to reward those who showed loyalty to his campaign as it struggled to build support.

A U.S. veteran who served as a reservist in Afghanistan, Buttigieg, had also been considered head of the Department of Veterans Affairs. That card went to former Obama White House assistant Denis McDonough.

Buttigieg’s nomination is in line with Biden’s stated commitment to diversity in government.

U.S. Representative Deb Haaland in New Mexico has emerged as Biden’s leading choice to lead the State Department, according to three sources familiar with the decision – making process, a selection that, if confirmed by the Senate, would make her the first Native American to head a cabinet agency.

In the Department of Transportation, Buttigieg can be accused of overseeing much of Biden’s plan to dramatically increase infrastructure spending, including building 550,000 power stations and charging for high-speed trains and other green projects, and persuading Congress to find a way to pay for new spending.

Buttigieg would face aviation challenges, including plans in Congress to review how the Federal Aviation Administration certifies new aircraft after two fatal Boeing 737 MAX accidents that led to the plane’s grounding in 20 months.

He would also need to decide how to monitor self-driving cars and driver assistance systems such as Tesla Inc’s autopilot, which has been tested for fatal crashes.

The National Highway Traffic Safety Administration, a transportation department agency, has not had a Senate-confirmed administrator since January 2017.