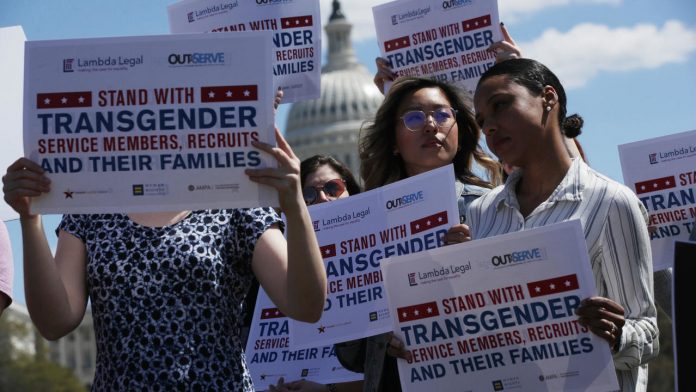 On Monday, President Joe Biden lifted a controversial ban from his predecessor on transgender people serving in the US military, a move that fulfills a campaign promise and will be halted by LGBTQ advocates.

“President Biden believes that gender identity should not be an obstacle to military service, and that the strength of the United States lies in its diversity,” the White House said in a statement.

“Allowing all qualified Americans to serve their country in uniform is better for the military and better for the country because an inclusive force is a more effective force. Simply put, it is the right thing to do and is in our national interest,” it said.

Patriotism does not know gender or orientation.

Breaking the transgender military ban is another important step in restoring the United States’ promise of equality.

Everyone with the courage and sense of duty to serve this country should be allowed to do so – with our gratitude and gratitude. https://t.co/2zY1qfPyx8

When Trump announced the 2017 ban on Twitter, he said the military needed to focus on “decisive and overwhelming victory” without being burdened by the “huge medical costs and disruptions” of having transgender people.

A report from the LGBT rights think tank from November 2020, Palm Center, which was co-authored by former military surgeons, said the ban on transgender people had damaged military preparedness.

While advocates applaud Biden’s traits, the fact that any president can decide whether transgender people can serve in the military is problematic, they say, adding that all Americans who are fit and skilled should have the right to serve.

The US Supreme Court ruled that Trump’s transgender policy for 2019 could stand while facing separate trials in lower courts.

About 1.3 million active personnel serve in the US military, according to data from the Department of Defense. There are no official figures on the number of trans members but Rand Corp, a US research institute, estimated in 2016 was about 2450 active service members trans people.