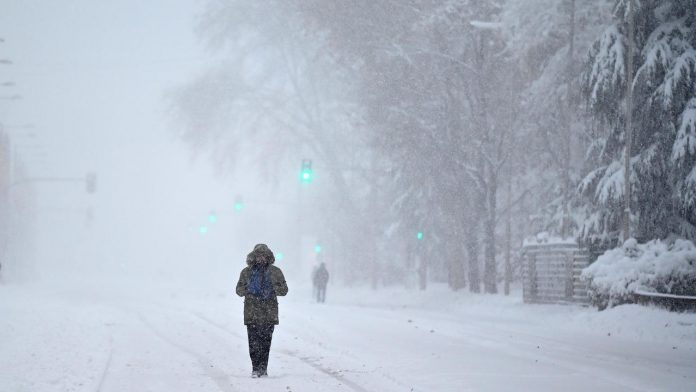 Schools in Madrid were closed on Monday while most trains and flights resumed as the Spanish capital tried to return to some form of normality after a huge snowstorm over the weekend.

Officials have asked people to stay home if possible after Storm Filomena dumped between 20-30 centimeters (7-8 inches) of snow on Madrid on Saturday, the heaviest snowfall since 1971.

The storm killed at least three people as it swept through Spain, keeping rescue workers and army snow plows occupied, freeing 2,500 drivers trapped in their vehicles.

Lack of enough salt and snow plows had officials only managed to clear main roads from snow and fallen tree branches on Monday, with most sidewalks, smaller roads and residential areas still covered.

Authorities are worried about the prospect of snow turning to ice, with temperatures expected to drop to minus 11 degrees Celsius (12 Fahrenheit) on Monday and minus 13 (9 degrees Fahrenheit) on Tuesday.

Ministers declined to say whether the capital would be declared a disaster zone, saying they needed to evaluate the damage first.

The government has insisted that the travel chaos will not affect the distribution of the coronavirus vaccine, with 350,000 doses to be rolled out nationwide on Monday.

“The delays – if there are delays – will be minimal and small,” Interior Minister Grande-Marlaska told Spanish public radio. The distribution of jabs to all regions was “guaranteed”, he added.

Throughout the weekend, people had responded to calls to help clear important roads in their neighborhoods to provide access to hospitals and health centers.

Most residents followed the government’s call to stay home on Monday, with the capital’s streets deserted and silent, except for the sound of shovels scraping snow and ice.

The few people who ventured out walked slowly, some used sticks or sticks to support themselves and prevent themselves from slipping and falling.

“People are not going out, especially older people,” said Javier Bermejo, a local butcher who said he only expected more production on Tuesday. “It’s a day to stay home.”

The deserted streets contrasted with the scenes on Saturday when residents of the Spanish capital ignored appeals that they stayed at home and flooded the streets to make snowmen, have snowball fights and even ski.