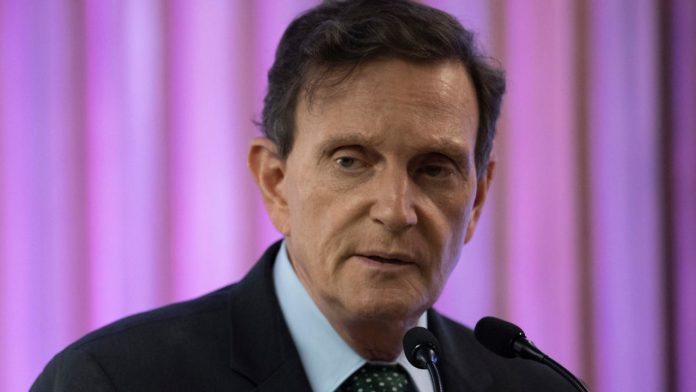 Rio de Janeiro Mayor Marcelo Crivella was arrested on Tuesday as part of a corruption investigation just nine days before the end of his term.

The judge who led the investigation, Rosa Helena Penna Macedo Guita, called him “the head of a criminal organization … installed inside the Rio mayor’s office in order to obtain illegal profits in the most diverse ways.”

After a two-hour hearing, she ordered that he be detained and television footage later showed that he was transferred to a prison in the north of the city.

A few hours later, a judge gave the mayor permission to be placed under house arrest, but Crivella must wear an electronic ankle bracelet, send in all her phone and computers and have no contact with third parties.

GloboNews TV channel broadcast pictures of the police who arrested the mayor in his home in the exclusive area of ​​Barra de Tijuca just before 06:00 (0900 GMT).

“I am the mayor who has done the most against corruption in Rio de Janeiro. I pray that justice will be done,” Crivella said.

Crivella claimed to be a victim of “political persecution”.

Several other people were also arrested as part of the same operation, including businessman Rafael Alves, the suspected brain.

He is the brother of Marcelo Alves, president of the municipal tourism agency Riotur.

He is the cousin of the evangelical preacher Edir Macedo, who is also Crivella’s uncle.

According to the investigation, which began in 2018, companies that wanted to secure contracts with Riotur gave controls to Rafael Alves.

“The criminal organization collected at least 50 million reais (about $ 10 million) from what we have been able to detect,” said Deputy Attorney General Ricardo Ribeiro Martins.

During his re-election campaign, Crivella, 63, claimed that his center-right opponent Eduardo Paes, who beat him 64 percent to 36 percent, would go to jail for corruption.

Crivella is a former pastor, missionary and gospel singer. Throughout his tenure, Crivella faced investigations into mismanagement, accused of mixing politics and religion and benefiting members of his church.

In July 2018, according to the newspaper O Globo, Crivella promised some evangelical preachers that members of Edir Macedo’s universal church for the kingdom of God would be given priority for cataract surgery in municipal clinics.

The prosecution recently launched an investigation into the suspected use of Macedo’s church to launder money.

After the highlights of hosting the 2014 World Cup final and the 2016 Olympic Games, Rio has since plunged into political and financial crises.

Rio’s governor Wilson Witzel was fired in August on suspicion of corruption.

Before him, the five former governors of the state of Rio were investigated by the courts and four were even sentenced to prison.