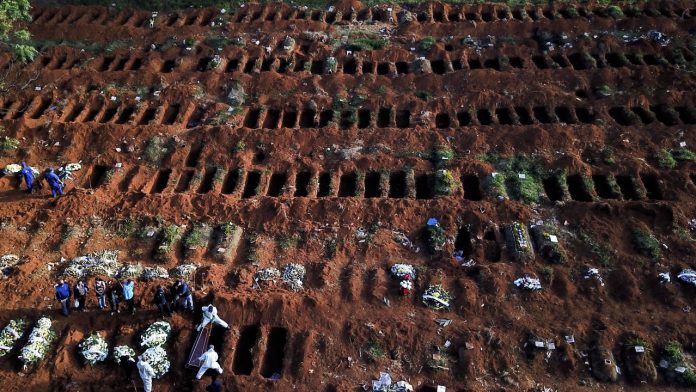 Brazil’s death toll COVID-19 exceeded 200,000 on Thursday, the health ministry said, as daily new cases accelerated to a record 87,843 after holidays in the country with the world’s second deadliest outbreak.

Experts warn Brazil has still not seen the height of cases due to people celebrating Christmas and New Year with friends and family. Others, including President Jair Bolsonaro, booked their regular beach summer vacations in the southern hemisphere.

“It’s a shame what happened in the summer. What we expect is that after January 15, we will unfortunately face a critical condition again in hospitals, says Rafael Deucher, a doctor in the state of Paraná, where 80% of the public intensive care beds occupied.

Immunologists say that various factors are likely to intensify what is a second wave of the virus. According to the government, Brazil has at least three weeks from launching its vaccine campaign, which has been criticized for not moving fast enough.

“People are tired and no longer follow preventive measures due to mental strain, but also due to the lack of a unified political discourse,” said Alexandre Naime, director of the Department of Infectious Diseases at the Universidade Estadual Paulista’s Faculty of Medicine.

“There are many people who are against science and public health, against the mask and for large gatherings.”

Brazil registered 1524 more deaths in the last 24 hours, according to the Ministry of Health. Since the outbreak began, nearly 8 million people have been infected and 200,498 have died.

Meanwhile, Mexico saw one of its highest daily coronavirus numbers on Thursday. The Ministry of Health reported 13,734 new confirmed cases of coronavirus and 1,044 more deaths, which totaled 1,493,569 infections and 131,031 deaths.

But the ministry has said that the actual number of infected people and deaths is likely to be significantly higher.