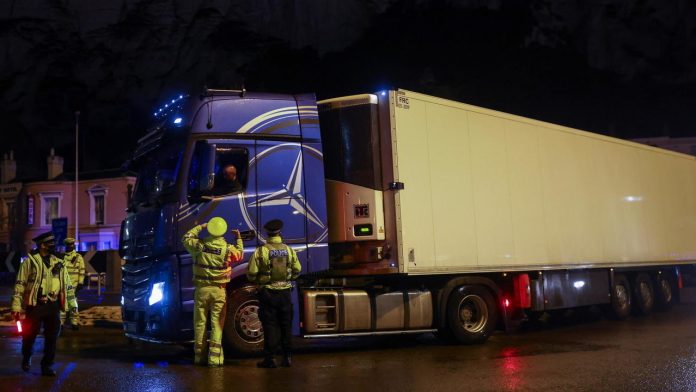 France and the United Kingdom will resume cross-border travel on Wednesday after a swift 48-hour ban to limit the spread of a new coronavirus variant that threatened British supply chains.

Much of Europe quickly banned British travelers and British goods from entering their nations following the discovery of a more portable variant of Covid-19 in Britain.

On Tuesday, dramatic images showed hundreds of trucks backed up in Dover, with the British Prime Minister Boris Johnson facing increased pressure to resolve the stalemate even when the deadline for the post-Brexit trade agreement threatened.

As of Tuesday, Britain’s Transport Minister Grant Shapps announced that Britain and France had agreed on a protocol that “will see the French border resumed for those traveling for urgent reasons, provided they have a certified negative COVID test.”

However, he urged truck drivers not to go to southern Kent county in the expectation of boarding a ferry or train.

“French citizens, people living in France and people with a legitimate reason must bear a negative test,” he said.

Despite the breakthrough in the talks, congestion around the main southern port of Dover is unlikely to subside in the short term.

Late on Tuesday, the major British transit hub said it would resume from midnight local time (2300 GMT) for travelers with a negative result.

The measures imposed on carriers have raised concerns about the shortage of certain fresh food products during a Christmas period which has already been damaged by strict coronavirus restrictions.

More than 2,800 trucks remain stranded in the southern English county of Kent and cannot make the transition to France, where drivers have spent a second night in their cabs.

As night fell on Tuesday, drivers of about 800 trucks parked at a nearby airport left their horns in protest for more than half an hour.

Despite the new agreement – which will be reviewed on 31 December – it is unclear when traffic will start moving again.

The British Ministry of Transport said: “All truck drivers, regardless of nationality, will need a lateral flow test.”

In a statement, they added that the test could detect the new Covid-19 variant “in about 30 minutes, rather than the 24 hours required after a PCR test”.

In a statement to the press, the French Ministry of Transport said that all travelers from the UK would need to present a negative Covid test to their airline, ship or railway company less than 72 hours before departure.

The European Union had called on its members to facilitate transit and to lift other transport bans in order to avoid disruptions in the supply chain.

Johnson, criticized for his handling of a pandemic that has caused nearly 68,000 deaths – one of the highest deaths in Europe – has claimed that the risk of truck driver transmission was “really very low”.

According to the World Health Organization, the transmission of this new variant is 40 to 70 percent higher.