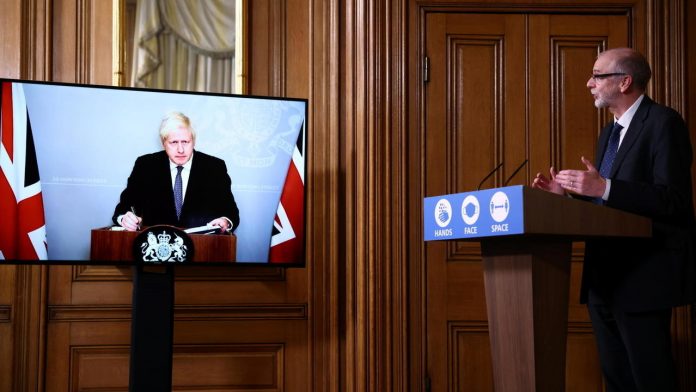 The British Prime Minister Boris Johnson said on Monday that the “escape route” from coronavirus was in sight when he announced that tough restrictions in England would not be extended after December 2.

“Breakthroughs in treatment, in testing vaccines, mean that the scientific cavalry is now in sight,” he told parliament.

“We know in our hearts that we will succeed next year. By spring, these advances should reduce the need for the constraints we have undergone in 2020.

“We have turned a corner and the escape route is in sight,” he said, warning that “Christmas can not be normal and there is a long way to spring”.

Johnson announced that England would resume a tiered system of tougher regional restrictions when the current deadlock ends on December 2, reinforced by major testing programs in areas with the highest prices.

The easing of restrictions will allow people to leave their homes for all purposes, with public religious ceremonies and certain leisure activities once again permitted.

Up to 4,000 spectators will be able to return to sports arenas and live performances in parts of England at low risk, although pubs can only reopen if they are not at the highest level.

The Prime Minister also announced a “time-limited” exemption for families to gather for Christmas.

“We all want some kind of Christmas, we need it,” he said in a statement from Downing Street, where he is self-isolating after coming in contact with a MEP who carries the virus.

“What we do not want is to throw caution against the wind and let the virus flare up again,” he added.

“Families need to make a careful assessment of the risk of visiting older relatives.”

The Prime Minister’s short-term plan revolves around a lot of quick tests after a trial in the city of Liverpool which the government said had led to a “significant case” in cases.

The system is now being tested in the state National Health Service (NHS) and in nursing homes, which it is hoped will enable residents to meet with visitors again.

If successful, it will be extended nationwide and to the general public.

Downing Street has said the differentiated system will be similar to what was in place before the shutdown, but more restrictive in some areas.

The government, under pressure due to the economic effects of the outbreak, will announce on Thursday what level each region will fall below.

Leaders in the hospitality industry threw the continued restrictions on their companies.

“They kill Christmas and beyond for many companies and their customers who look forward to and rely on arenas being open at this time of year,” said Kate Nicholls, UKHospitality’s retailer.

“Unfortunately, for many employees, it will be a Christmas without work.”

The UK has seen more than 55,000 deaths from around 1.5 million cases – one of the worst in the world – and has struggled to control a second increase in infection.

Health Secretary Matt Hancock told BBC Radio on Monday that “the top level will have to be tougher than the previous top level”.

“We need to make sure we take down the virus, not just flatten it out,” he said.

Johnson’s announcement came after the British pharmaceutical group AstraZeneca and the University of Oxford on Monday said they would seek approval for their vaccine against Covid-19 after it showed an average efficacy of 70 percent.

“The most hopeful progress of all is how the vaccines are now getting closer and closer to freeing us from the virus, which emphatically shows that this is not a pandemic without an end. We can take a big heart from today’s news,” Johnson said.

“The NHS is preparing a nationwide vaccination plan that will be ready next month, which we have never seen,” he added.