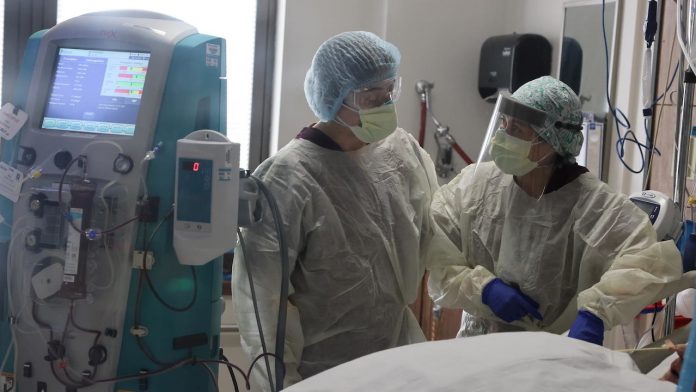 The governor of California on Thursday ordered a curfew imposed on all indoor social gatherings and unnecessary activities outside the home in most of the state in a major escalation of measures to curb an alarming increase in coronavirus infections.

The restricted home restrictions take effect from 10pm to 5pm every day, starting on Saturday night and ending on the morning of December 21 and covering 41 counties representing over 94% of the state’s population, Governor Gavin Newsom said.

“The virus is spreading at a rate we have not seen since the beginning of this pandemic, and the next few days and weeks will be crucial in stopping the sharp rise,” Newsom said in a statement announcing the action.

He said the restriction is essentially the same as California’s first home order for the entire country that Newsom introduced in March, except that it only applies under certain exit conditions rather than around the clock.

Due to the increase in # COVID19 cases, CA issues a limited Stay at Home Order.

Unnecessary work and gatherings must be stopped from 22.00 to 05.00 in the counties in the purple level.

This takes effect at 10 pm on Saturday and lasts for one month.

Together we can flatten the curve again.

Shortly before, President-elect Joe Biden emerged from a teleconference with ten governors from both sides who said they had discussed a possible “implementation of a national worm mandate.”

Biden, who has stressed the need for a coordinated national strategy to combat the pandemic, also reiterated that he had no plans to impose a US deadlock, contrary to claims made during the election of President Donald Trump and other Republicans.

“I do not intend to turn off the economy, period. I will turn off the virus, Biden told reporters, adding: “I say it again: no national shutdown. All regions, all societies are different. ”

Health experts say that greater social mixing and indoor meetings during the holiday season, combined with colder weather, are likely to accelerate the increase and threaten to overwhelm already strained healthcare systems.

Newsom, a Democrat for the first time, warned that “stricter measures” may be necessary if recent efforts to disrupt the infection do not fall short.

Republican Gov. James Gallagher sharply criticized the governor’s actions, saying: “An arbitrary curfew will only further decimate struggling companies that are already facing some of the toughest barriers in the country.”

The recently ordered curfew in California, the most populous US state with about 40 million inhabitants, came a day after New York City’s public school system, the country’s largest, stopped teaching in the classroom due to rising levels of infection there.

Critics of New York Mayor Bill de Blasio questioned why public schools, which had partially opened for personal learning in September, would be closed again while bars, restaurants and other businesses were allowed to remain open.

De Blasio said school closures were only temporary and he expects the state to close indoor food and gyms in the city “within a week or two” given rising levels of infection.

Natalia Petrzela, whose 8-year-old daughter attends a public school in New York City, said the uncertainty about lessons had affected the families emotionally.

“I’m sick of a working mother waiting and checking Twitter to see if schools will be open tomorrow and how I can juggle my responsibilities and tell my daughter to go through,” Petrzela told Reuters in an interview.

Speaking to members of the White House Working Group on the Pandemic, Vice President Mike Pence said it was the working group’s and the United States’ Center for Disease Control and Prevention that “we do not need to close our schools.”

Government officials in at least 22 states, representing both sides of the US political divide, have issued new public health assignments this month. These range from stricter boundaries for social gatherings and non-essential corporations to new requirements for wearing masks in public places.

The number of patients in hospitals with COVID-19 in the United States has increased by almost 50% in the last two weeks, with almost 79,000 people being treated for the disease in hospitals across the country from one Thursday, according to a Reuters figure, mostly at preferably during the pandemic.

The US death toll from COVID-19 surpassed a dismal new milestone of 250,000 lives lost on Wednesday, and public health experts have estimated that number could climb well over 400,000 in March.