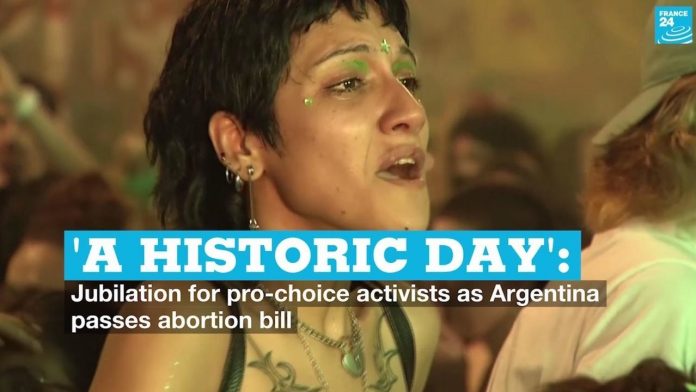 On Wednesday, Argentina became one of only a handful of Latin American countries to legalize abortion when the country’s Senate voted to approve the historic bill after a 12-hour debate.

The announcement prompted the celebration on the streets of the capital, Buenos Aires, where thousands of election campaigns had gathered to see the Senate’s verdict on giant screens.

Previously, abortions were only allowed in cases of rape or where the mother’s life was in danger.

According to the government, as many as 520,000 illegal abortions are performed each year in the country with 44 million, while 38,000 women are hospitalized each year after poorly performed illegal terminations.

However, the change in the law has proved to be very controversial in the largely Catholic country and earlier Wednesday and Tuesday, pro-life protesters had also taken to the streets to make their voices heard before the vote in the Senate.

But that was not enough to change the result.

“I am very excited, it is a historic day, today is historic, there is nothing more to say, it is a right that has been earned and we are going for more, this has just begun,” optional activist Alue Alfonso told AFP.

Argentina is now joining Cuba, Uruguay, Guyana and some parts of Mexico as the only countries in the region where optional abortions are legal.