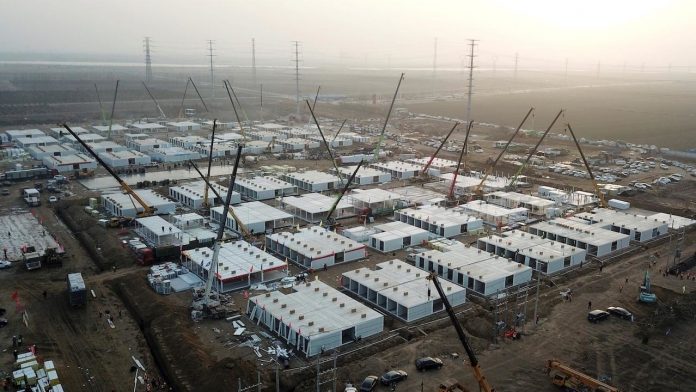 Thousands of prefabricated rooms fill a large field on the outskirts of China’s Shijiazhuang city as construction crews work around the clock to build a large quarantine facility to curb the city’s growing Covid-19 outbreak.

China has largely taken the virus under control even as the rest of the world struggles with increasing deaths and congested hospitals.

But a number of small, localized outbreaks have prompted Chinese officials to order mass testing, strict lock-in and to prepare to relocate entire villages to the quarantine facility to wipe out a resurgence.

The scenes outside Shijiazhuang, northern China, are reminiscent of Beijing’s efforts at the beginning of last year to build makeshift field hospitals in Wuhan – the central city where the Covid-19 cases first occurred – within days.

The quarantine buildings in Shijiazhuang are equipped with bathrooms, Wi-Fi and air conditioning and will house close contacts of confirmed virus patients when they are completed in the next few days.

State broadcaster CCTV showed workers in vests with high visibility and hard hats mounting the cabin-like structures in the dark, while flags with the names of building groups and Communist Party units fluttered from the finished buildings.

The facility is expected to have enough room to accommodate more than 4,000 people when completed, CCTV said Tuesday.

The work began on January 13 when northern Chinese cities placed millions under lock and key over hundreds of new infections in recent weeks.

More than 20,000 villagers in the surrounding Hebei province have been quarantined in centralized facilities, state media reported last week.

Meanwhile, millions of residents have been tested for the virus several times.

China is on high alert for a potential wave of cases triggered by the coming lunar weekend, which is expected to “pose major challenges” for virus prevention, National Health Representative Wang Bin said last week.

Millions of city dwellers are on their way to their hometowns to celebrate.

Virus cases have increased around the world in recent weeks, with the global number of deaths now over two million.