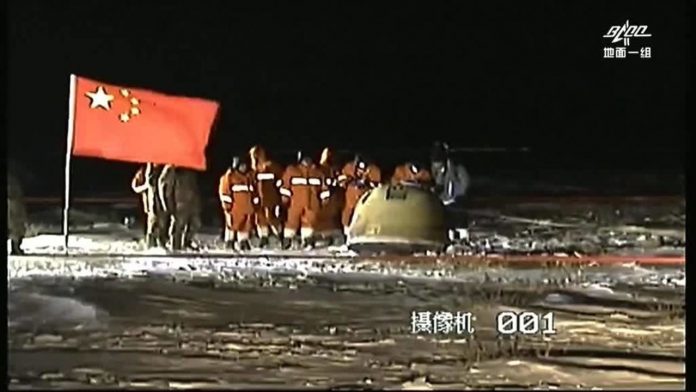 A Chinese lunar capsule returned to Earth on Thursday with the first fresh rock samples from the moon in more than 40 years, providing an opportunity for new insights into the history of the solar system and marking a new landmark for China’s fast-moving space program.

The capsule in the Chang’e 5 spacecraft landed just before two o’clock (1800 GMT on Wednesday) in the Siziwang district of Inner Mongolia, China’s National Space Administration reported.

The capsule had previously been separated from its orbital module and bounced off the Earth’s atmosphere to reduce its velocity before passing through and floating to the ground in parachutes. After recovery, the canister and its samples were flown to the space program’s campus in Beijing to begin the disassembly and analysis process, the space administration said.

The mission achieved new groundbreaking for the lunar exploration program in terms of collecting samples, launching a vehicle from the lunar surface and docking it with the capsule to return the samples to Earth, the administration said.

“As our nation’s most complex and technologically groundbreaking space mission, Chang’e 5 has achieved several technological breakthroughs … and represents a milestone,” it says.

Two of Chang’e 5’s four modules sat down on the moon on December 1 and collected about 2 kg (4.4 pounds) of samples by scooping them from the surface and drilling 2 meters (about 6 feet) into the crust of the moon. The samples were deposited in a sealed container which was returned to the return module by an ascent vehicle.

To the great delight of viewers, films from state broadcaster CCTV showed a hairy white animal, possibly a fox or rodent, running in front of the capsule as it lay on the ground and stopping briefly as if to investigate the unknown object.

Recovery personnel had prepared helicopters and off-road vehicles to come home on signals emitted by the lunar spacecraft and locate it in the dark covering the vast snow-covered region of China’s far north, long used as a landing site for China’s Shenzhou manned spacecraft.

“A legacy that will last for many, many years”

The return of the spacecraft marked the first time scientists have received fresh samples of moonstones since the former Soviet Union’s Luna 24 robot probe in 1976.

The newly collected rocks are believed to be billions of years younger than those previously obtained by the United States and the former Soviet Union, and offer new insights into the history of the moon and other bodies in the solar system. They come from a part of the moon called Oceanus Procellarum, or Ocean of Storms, near a place called Mons Rumker which is believed to have been volcanic in ancient times.

As with the 382 kilograms (842 pounds) of moon samples taken back by American astronauts from 1969 to 1972, they will be analyzed for age and composition and are expected to be shared with other countries.

The age of the samples helps fill a gap in knowledge of the moon’s history about 1 billion to 3 billion years ago, says Brad Jolliff, director of the McDonnell Center for Space Sciences at Washington University in the US city of St. Louis. Louis wrote in an email. They can also provide clues about the availability of economically useful resources on the moon, such as concentrated hydrogen and oxygen, Jolliff said.

“These samples will be a treasure chest!” Jolliff wrote. “My hat is over to our Chinese colleagues for taking on a very difficult task; The science that will flow from the analysis of the returned samples will be a legacy that will last for many, many years and will hopefully involve the international research team. ”

Chang’e 5 exploded from a launch base in China’s southern island province of Hainan on November 24 and seemed to have completed its highly technologically sophisticated mission without any problems.

It marked China’s third successful lunar landing but the only one to take off again from the moon. Its predecessor, Chang’e 4, became the first probe to land on the moon’s little-explored remote side and continues to send back data on conditions that could affect a future extended stay for humans on the moon.

The moon has been a particular focus of the Chinese space program, which says it plans to land people there and possibly build a permanent base. No timeline or other details have been announced.

China has also joined the effort to explore Mars. In July, it launched the Tianwen 1 probe, which carried a lander and a robot rover to search for water.

In 2003, China became the third country to send an astronaut into orbit after the Soviet Union and the United States, and its space program has been more cautious than the US-Soviet spaceflight of the 1960s, which was marked by deaths and takeoff errors. By taking step-by-step steps, China is on the road to building a program that can sustain steady progress.

The latest flight includes cooperation with the European Space Agency, which helps to monitor the mission. Amid concerns over the Chinese space program’s secrecy and close military ties, the United States bans cooperation between NASA and the CNSA unless Congress approves it. This has prevented China from participating in the International Space Station, which it has tried to compensate for with the launch of an experimental space station and plans to complete a permanently orbiting outpost within the next two years.