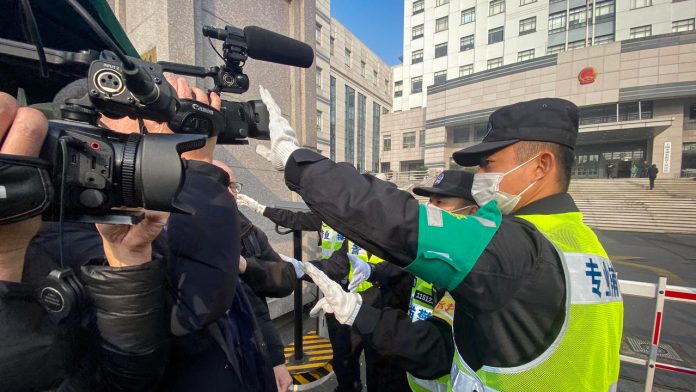 A Chinese court handed down a four-year prison sentence on Monday to a citizen journalist who reported from downtown Wuhan at the height of last year’s coronavirus outbreak, due to “picking quarrels and provoking problems,” her lawyer said.

Zhang Zhan, 37, the first known to have been tried, was among a handful of people whose first-hand stories from cramped hospitals and empty streets showed a more horrific picture of the pandemic center than the official story.

“We will probably appeal,” lawyer Ren Quanniu told Reuters, adding that the trial in a court in Pudong, a district in China’s business center in Shanghai, ended at 1 p.m. 12.30 and Zhang was sentenced to four years.

“Zhang believes she is being persecuted for exercising her freedom of speech,” he had said before the trial.

Criticism of China’s early handling of the crisis has been censored and whistleblowers, as doctors, warned. State media have credited the success of the virus to President Xi Jinping’s leadership.

The virus has spread worldwide to infect more than 80 million people and kill over 1.76 million, paralyzing air travel when nations threw up barriers to what has disrupted industries and livelihoods.

In Shanghai, police maintained tight security outside the courthouse, where the trial began seven months after Zhang’s detention, although some supporters were not injured.

A man in a wheelchair who told Reuters that he came from the central province of Henan to show support for Zhang as a Christian, wrote his name on a poster before the police came to escort him.

Foreign journalists were denied access to the court “because of the epidemic”, the court’s security authorities said.

A former lawyer, Zhang, arrived in Wuhan on February 1 from his home in Shanghai.

Her short videos uploaded to YouTube consist of interviews with residents, comments and photos from a crematorium, train stations, hospitals and the Wuhan Institute of Virology.

Imprisoned in mid-May, she began a hunger strike in late June, according to court documents from Reuters. Her lawyers told the court that the police tied her hands and force-fed her with a tube. In December, she suffered from headaches, dizziness, stomach pain, low blood pressure and throat infection.

Requests to the court to release Zhang on bail before the trial and livestream trial were ignored, her lawyer said.

Other civic journalists who had disappeared without explanation included Fang Bin, Chen Qiushi and Li Zehua.

Although there has been no news of Fang, Li reappeared in a YouTube video in April to say he was forcibly quarantined, while Chen, although released, is under surveillance and has not spoken publicly, a friend has said. .