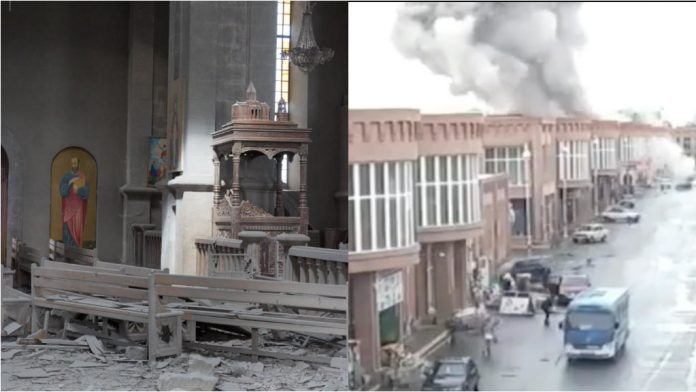 The war waged by Azerbaijan and Armenia over the disputed territory of Nagorno-Karabakh is taking its toll on civilians of both nationalities. Our team spoke to an Armenian woman and an Azebaijani man, both living in cities that have been bombed.

On September 27, open war broke out between Azerbaijan and Armenia, thirty years after the first major conflict between these two countries over the disputed Nagorno-Karabakh territory. Both sides have fired mortar and missiles that sometimes fall up to 60 kilometers from the front lines and land in civilian areas. On October 11, local NGOs reported that more than 500 people had died as a result of the conflict, including at least 60 civilians. Another 70,000 to 75,000 people have been displaced, some traveling to other regions and others fleeing the country altogether.

Russian authorities organized a humanitarian ceasefire on October 10, allowing the two sides to exchange bodies and prisoners of war. But both the separatist Armenian forces in Nagorno-Karabakh and the Azeri army accused the other side of breaking the ceasefire and renewing the bombing.

This video, filmed on October 5, shows a cluster bomb exploding in the center of Stepanakert, the capital of Nagorno-Karabakh. This use of this type of weapon is prohibited under international agreements.

Jowharobserver teams spoke to two people whose lives have been drastically affected by this conflict. One lived in Stepanakert, the capital of Nagorno-Karabakh, before fleeing. The other lives in Gandja, the second largest city in Azerbaijan. These two cities have been deeply affected by the conflict.

Anush is Armenian. She is 35 years old and has four children. She fled Stepanakert on September 28 when Azerbaijani armed forces began bombing the city. One of her cousins ​​and a close friend died in the attacks.

My mother-in-law woke me up around noon. 8 Sunday, September 27th. The first thing she said was, “Azerbaijan is bombing us.” At first I did not believe it. We hurried out to the balcony and saw bombs falling only two or three kilometers from our apartment. The children were scared.

Absolutely abhorrent as Azerbaijan protects one of the symbolic landmarks of Nagorno Karabakh, Ghazanchetsots Cathedral. I have a complete loss of words pic.twitter.com/MBvCKPSIfA

This shows damage to the Ghazanchetsots Cathedral in Shushi on October 8th. Azerbaijan denies having bombed the cathedral.

We found shelter in the basement and stayed down there until the next day. Then we decided that I should take the kids and travel to Erevan [Editor’s note: The capital of Armenia] where we have family. So far, my husband and my family have stayed in Stepanakert to see how they can help our soldiers. Many other families in Stepanakert did the same.

We try to talk to my family every day, but the connection is really bad. For security reasons, we are not trying to talk about the war or where the bombs fall. If we talk on the phone, we are afraid that the Azerbaijani armed forces will intercept the talks and use the information to set targets for their bombing campaigns. During these rare calls, I sometimes hear explosions in the background.

When the sirens sound, they know an attack is imminent and they take shelter in the basement. In fact, most people spend most of their time in the basement. The worst thing is the uncertainty. We do not know what will happen to our city or our country in the future, especially if the international community does not intervene.

Armenians are not the only victims of these clashes. Videos released on October 4 show the Armenian army firing missiles at Gandja, the second largest city in Azerbaijan.

At least nine people died in the missile attack, according to local NGOs, and the market in the historic center was partially destroyed.

“These attacks are aimed only at civilians”

Amrah Jafarov is 22. He lives in the Yeni district of Gandja, Azerbaijan, which is very close to the place where Armenian missiles fell.

On the morning of September 27, my mother told me that the fighting had started again. While reading the news online, I heard the sound of Azerbaijani planes heading towards the front lines. I understood that this time was different [Editor’s note: Armenia and Azerbaijan have clashed regularly since 2008 on the border of Nagorno-Karabakh]. We have never experienced the effects of the fighting in Gandja before. This is truly the first time that the war has reached our city.

This footage from a surveillance camera shared by Reuters news agency shows the moment a missile hit the market in central Gandja on October 5.

The first attack took place on 4 October. We heard several missiles falling in different places throughout the city. Some of them did not explode, others were intercepted. But one of them hit a civilian’s home on Aziz Aliyev Street.

The attacks continued the following days, both day and night. They hit civilian homes as well as the central market of Gandja and Aziz Aliyev, both of which are densely populated areas. One person died and about a dozen people were injured.

These attacks were intended to target civilians, not military bases or airports located on the outskirts of Gandja [Editor’s note: Gandja International Airport, which is also a military airport used by the Turkish army, is ten kilometres from the town centre] There were no military buildings near the affected zones.

The Armenian armed forces have continued to bomb Gandja, even after the ceasefire. This time, Khatai Avenue, another major street, was hit. Nine people died and a dozen more were injured [Editor’s note: Armenia has denied that it attacked Gandja after the ceasefire and, instead, accused Azerbaijan of bombing Stepanakert at this time].

Apart from the visible wounds, there are also invisible wounds. Many children and the elderly were psychologically affected by the explosions. Our city is in theory far from the battle zone, and so no one was psychologically prepared that we could be targeted. There is no alarm system that warns people of an impending attack, and the buildings are not designed to withstand this kind of attack. When an attack happens, it is already too late – there is no time to run, nowhere to hide.

This video shows a missile that fell on Gandja on October 11 after the ceasefire was put in place.

Close friends and family living in Baku [Editor’s note: the capital of Azerbaijan], offered to provide shelter for my family and I, but we declined the offer. Lots of people left their homes during the first war between the two countries [Editor’s note: between 1988 and 1994] and never came back. We do not want to be in the same situation; That’s why we do not want to leave the city. People try to continue with their daily routines. We have been at war for almost 30 years and we do not want future generations to go through the same thing.

On October 12, Azerbaijan’s legal lawyer reported that at least 41 people had been killed and 207 had been injured in these attacks on civilian zones. At least 1,185 homes were affected.