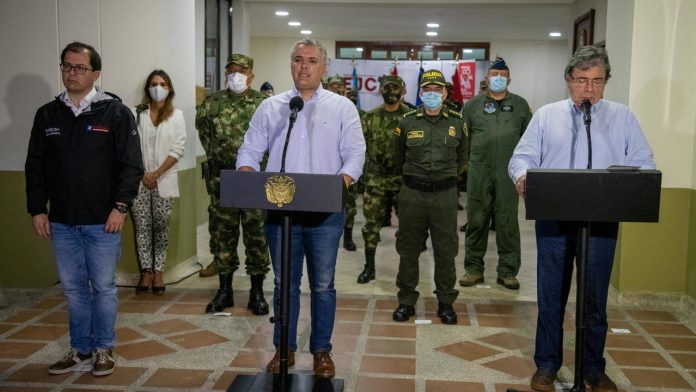 Colombian security forces have killed a commander in chief of the National Liberation Army (ELN), best known for his nom de guerre Uriel, during an operation in the coastal Pacific province of Choco, President Ivan Duque said on Sunday.

Uriel, known for his media appearances, online videos and a one-time Twitter account, was responsible for kidnappings, the murders of human rights activists and members of the security forces and the forced recruitment of minors, Duque said in a broadcast with police and military leaders Sunday night.

“The terrorist Andres Felipe Vanegas Londono, who used the alias Uriel, has been put down,” Duque said. “This criminal was killed in a careful operation by shared intelligence of the Colombian National Army and National Police.”

Uriel used his social media to “defend crime,” Duque said as he urged other ELN members to demobilize.

The ELN, founded in 1964 by radical priests, is considered more radical and less centrally controlled than the FARC rebels, who signed a peace treaty in 2016 and are now a legal political party.

The ELN, which has about 2,000 fighters, began peace talks with the previous government, but the talks fell apart after a car bomb in Bogota and the Duque demanded that the guerrillas release all its hostages.

The government recently announced the capture of eight insurgents, which it accuses of having participated in the bombing that killed 22 police detainees in early 2019.