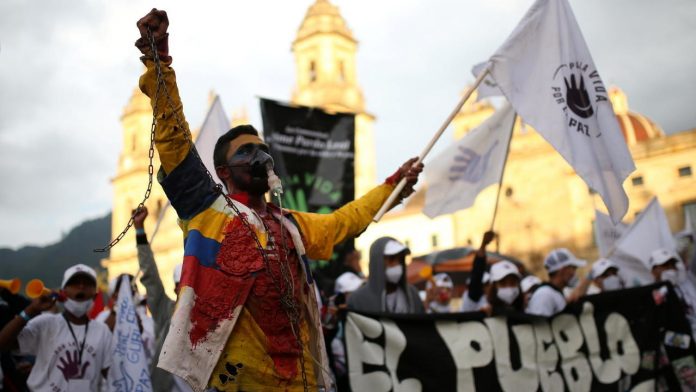 About 2,000 former FARC guerrillas gathered in the Colombian capital on Sunday to protest the killing of 236 former combatants since signing a 2016 peace deal.

Members of the former rebel movement turned political party arrived in Bogota after completing a 200-kilometer march from the southern city of Mesetas.

“We are mobilizing to demand respect for our lives and also for compliance with the peace agreement,” FARC Senator Victoria Sandino told AFP in what she called a “genocide against the signatories” in the 2016 peace agreement, which ended half a century of conflict. .

Sandino holds one of 10 congressional seats reserved for the FARC during the peace deal, as the majority of the movement laid down its arms.

The march began in Mesetas on October 21 after the killing of two local ex-FARC fighters days before.

Two more insurgents were killed on October 24 as the delegation continued toward Bogota, in what Rodrigo Granda, one of the negotiators of the agreement and a leader of the party, described as “a low blow to peace.”

On Sunday, the ex-rebels marched to Bolivar Square in the historic center of Bogota and converged with two other delegations from the south and north of the country to demand a meeting with right-wing President Ivan Duque.

Duque came to power in 2018 and promised to change the peace agreement reached by his predecessor Juan Manuel Santos, whom he considered too lenient with former rebels accused of atrocities.

However, Congress has rejected the move.

The marchers played drums, blew trumpets and waved banners, including one with the slogan “Duque: we did not sign the peace treaty to be killed.”

“We ask the President to meet with us so that we can talk about the challenges facing the Colombian state in guaranteeing the security of its citizens,” said Pastor Alape, a prominent FARC party leader.

According to the FARC, 236 signatories to the peace agreement have been killed since it was signed.

“There is a state responsibility in these crimes,” Alape said, adding that the killings are motivated by “intolerance in the speeches of government officials and even the president of the republic.”

The government says drug trafficking organizations are behind most of the killings as they fight a peat war over cocaine production and exports through Central America to the United States.