Home World Conflicts between Tunisian police and rioters continue after the anniversary of the...
Facebook
Twitter
WhatsApp
Linkedin
LINE 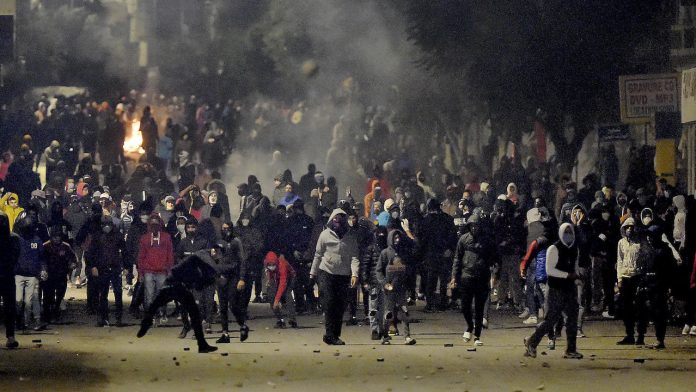 Hundreds of young people clashed with police in cities across Tunisia late Monday, throwing stones and petrol bombs into the capital as security forces used tear gas and water cannons to try to quell the unrest.

Up to 300 young men clashed with police in the capital’s Ettadamon district, Reuters reporters said, while residents of Kasserine, Gafsa, Sousse and Monastir described street violence in those cities.

Riots and protests have followed the 10th anniversary of a revolution that yielded democracy but few material gains for most Tunisians, with anger growing over chronic unemployment and poor government services.

But without a clear agenda, political leadership or support from major parties, it is not clear whether the demonstrations will gain momentum or die, as many previous rounds of protests have done since 2011.

The crowd in Ettadamon on Monday shouted no slogans during their clashes with police wearing body armor and carrying poles. Security forces patrolled the area in military vehicles.

A decade after throwing off the shackles of autocratic rule, Tunisia was heading for an economic crisis even before the global coronavirus pandemic struck last year, destroying the tourism industry and shutting down other companies.

>> Focus: To take stock of Tunisian democracy, ten years after the revolution

A spokesman for the Interior Ministry said on Monday that police had only detained 632 people on Sunday after what it called a riot across the country that included looting and property attacks. Most of the prisoners were aged 15-20, it is said.

In Tunis’ central Bourguiba Avenue, a tree-lined boulevard flanked by government offices and colonial buildings where the biggest protests of 2011 took place, protesters on Monday said they wanted people arrested in recent days to be released.

“They call everyone who protests against the system a thief … We have come with exposed faces during the day and not at night to say we want jobs … We want dignity,” said Sonia, an unemployed graduate who did not want to enter her last name.

Protesters with her chanted “no fear, no fear! The street belongs to the people! ”

In his home Mnihla district in Tunis, President Kais Saied addressed a crowd of dozens of people who reaffirmed their right to “work, freedom and dignity”. He warned that some political forces were trying to manipulate the protesters to “wreak havoc”.