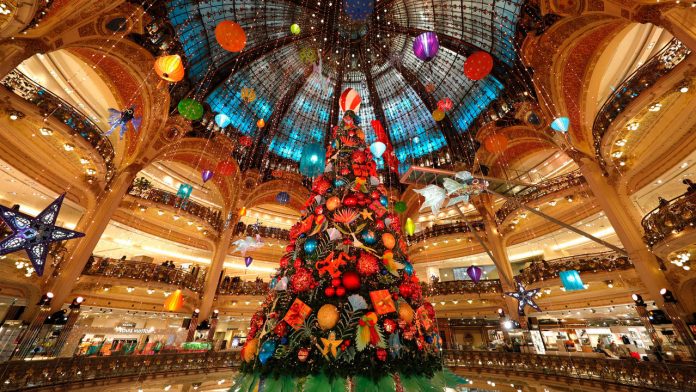 After another month of locking, the doors are finally open again in the Paris flagship department store. The Christmas lights are on and the festive window screens are in place, but with tourists noticeably absent, there may not be much for the shops to celebrate this Christmas.

Unnecessary stores were finally reopened throughout France on 28 November. As Christmas soon approaches, these large stores look forward to welcoming their old customers in an attempt to save a catastrophic financial year and hopefully look forward to 2021 with some optimism. But the lack of tourists will have a serious impact on their annual income.

On one of Paris’ most famous shopping streets, Boulevard Haussman, the famous Parisian department stores are already dressed in their Christmas decor. The annual festive windows show no trace of the coronavirus-Joakim and the giant Christmas tree is proud of its place in the heart of Galeries Lafayette.

“Reopening four weeks before the Christmas weekend is very good news for our members,” said Yohann Petiot, head of the Alliance du Commerce, which brings together department stores and clothing and footwear retailers. “Now we will do everything we can to save Christmas.”

“2020 has been very difficult for department stores,” Petiot explains in an interview with FRANCE 24. During the year, these important Parisian stores have had to contend with three full months of shutters.

The CEO of the Galeries Lafayette group, Nicolas Houzé, estimated the loss at as much as half of sales for the full year in an article in Le Monde. That company at least benefited from the previous opening of the BHV DIY department, the Lafayette grocery store and the Italian delicatessen Eataly, as they fell into the category of important stores.

The situation is very gloomy for the neighboring store Printemps, which this week announced a redundancy plan aimed at ensuring its survival. Seven stores will be forced to close in the coming months, threatening 430 jobs out of the 3,000 employees the group currently employs.

This restructuring is not just due to the Covid-19 crisis: the group has lost momentum for several years and the clothing market has shrunk by 15% over the last decade. “In addition to these economic challenges, there were the terrorist attacks, the demonstrations with the yellow vest, the transport strike,” a spokesman for Printemps explained. “Covid exacerbated an already difficult situation.”

Tourists contribute 40-50% of the trade

State financial support – including a partial unemployment benefit and help with commercial leases for the month of November, when department stores were forced to close – has helped absorb some of the losses due to the crisis. “But there is no contingency plan for all the shares we already have, we have to somehow sell what we have,” says Petiot.

Petiot hopes that customers will flood back to the big stores “out of solidarity” to reduce inventory. But Paris luxury goods stores have to rely on a local clientele in the meantime, as international tourists are still not allowed to travel to France. “This represents a huge loss of revenue. Tourists account for 40% to 50% of sales,” he says. “The exceptions are the BHV and Bon Marché stores, which are more oriented towards a Parisian clientele.”

Since the 1980s, Paris landmark department stores – which have been around for more than a century – have always relied on an advanced foreign clientele, says Sabine Heitz-Spahn, a marketing professor at the University of Lorraine who specializes in city stores. “This customer base is motivated by the pleasure of buying luxury goods at a lower rate, but they will also discover majesty in these stores. It is an important tourist experience.”

These classic department stores are now suffering as a result of this strong dependence on foreign consumers, as they have not invested enough in online retail.

“Management did not realize the importance of digital in recent years. As a result, they have invested little in digital tools,” explains Heitz-Spahn. “This was a huge strategic mistake, even before the arrival of Covid-19.”

“The Covid-19 crisis has served as a foothold in our digital transformation,” says Petiot.

After the initial shutdown, Galeries Lafayette also taught salespeople to focus on a more local clientele, especially the younger customers, by attracting them via social networks.

“We highlight important products from our collections via Stories on Instagram,” says a complete manager who prefers to remain anonymous. “It is up to us to recreate a sense of longing.”

The end of this second lock is accompanied by at least one real glimmer of hope: the possibility of a vaccine in the coming months.

“For us, this vaccine signals the possibility that an important international business will soon return,” says Petiot.