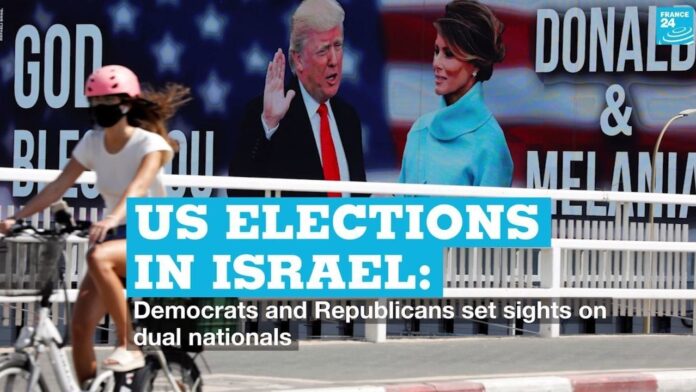 As the U.S. presidential election approaches, Democratic and Republican campaigns in Israel hope to win votes from the country’s large population of U.S.-Israeli dual citizens who can help make a difference in who wins the White House race.

In Tel Aviv, Republican campaigns have been out in force in recent days and have put up a billboard and posters in support of US President Donald Trump.

“People in the United States, there are many, many millions who love Israel, and they know how much the administration has done for Israel in the last four years. They want to see people here in Israel say thank you,” Marc Zell, president of Republicans overseas Israel, told Reuters.

“That’s what this sign over there says behind me, it says we owe Donald Trump a gratitude for all the things he has done, for Israel, for America and indeed for the world.”

Trump pleased many Israelis by recognizing Jerusalem as the capital in 2017 and moving the U.S. embassy from there from Tel Aviv, and about 71 percent of Israelis support the U.S. president, according to a recent Pew poll.

But Democrats are also mobilizing to win U.S.-Israeli voters, including arranging discounts on courier services for those who vote by mail.

“The overwhelming majority of the Democratic Party including Joe Biden and Kamala Harris have a decades-long record of being strongly pro-Israel, undoubtedly pro-Israel, it is a pro-Israel that stems from a deep understanding of Israel’s geostrategic role, “Democrat told campaign Hadass Tesher to Reuters.

As many as 300,000 American-Israelis are eligible to vote in the election, according to some estimates, and many are registered in key swing states, such as Florida and Pennsylvania, meaning their votes can make a difference in the outcome of the election.

“I think voters in Israel will have a big influence on the election, especially in more states and districts, and voters abroad in general have a lot of influence,” said Heather Stone, president of Democrats Abroad Israel.

“We have seen increased interest in voting and enrollment has tripled, and membership in Democrats abroad has doubled, and we believe it looks like we will be on the verge of victory in more places.”