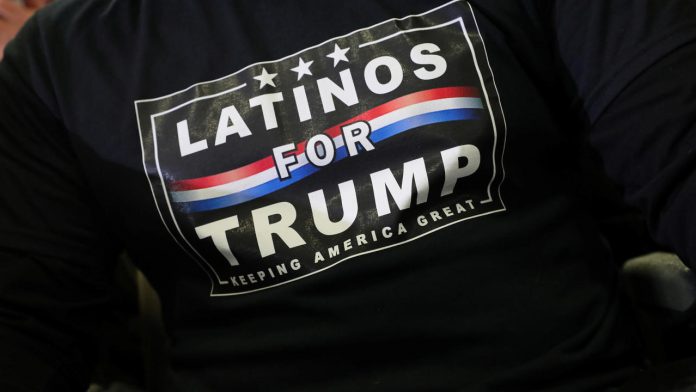 More Latin Americans voted for US President Donald Trump in the 2020 election than in 2016, enabling those sitting to win important battlefield states such as Florida and Texas in a shift that could have a long-term impact on the US political landscape.

Wobbling between hope and disappointment, Democratic candidate Joe Biden on Thursday appeared to have eliminated his Republican rival Donald Trump in the wake of the November 3 US presidential election. But the “blue wave” that the statements promised during the campaign was never realized.

While opinion polls seem to have been dazzled by the incoming results, analysts have left itching in their heads and tried to identify all sorts of reasons that led the incumbent president to defy opinion polls.

It seems certain that “the vote in Latino helped prevent the Democrats from winning a clear victory,” said Paul Schor, associate professor of American social history at the University of Paris-VII, in an interview with FRANCE 24. “It is no longer a monolithic block. “

In Florida, the vote for Trump increased by more than 3% among Latinos compared to 2016 – a decisive factor in Trump’s winning of the key state for the second time in a row. In Texas, too, some Latin Americans, who overwhelmingly voted for the Democrats in 2016 and in the 2018 midterm elections, chose Trump this time.

This shift to the right “is one of the surprises of this election and largely explains why the outgoing president was able to win in Texas,” Schor said.

Of course, the Spanish-speaking community has remained mostly loyal to the Democrats. Biden attracted nearly two-thirds of those votes and could not have won Arizona without them, CBS said. However, as Schor points out, the erosion of this Latino support base is one of the great lessons of this election.

“We can no longer discuss this society as a monolithic bloc that Democrats used to win because of some Republicans’ anti-immigration rhetoric,” Richard Johnson, a specialist in American politics and politics at Queen Mary University in London, told FRANCE 24.

There is now a varied range of Latino voices, which may differ depending on country of origin, religious affiliation, age and gender or socio-professional status. It may seem surprising that the immigration issue is no longer the main driver of this segment of the population, even though Trump presents himself as a champion of tough migration policies and has not refrained from labeling immigrants from Latin America. as “rapists” and “thieves”.

Although he has raised heavy insults against Latinos during his tenure, Trump also did much to win them back, compared to Biden, who was less active on this front, “perhaps thinking a little too quickly that their vote was largely his”, Sa Schor.

Trump opened campaign offices in the heavily Spanish-speaking areas of cities across Florida and Texas ignored by his opponent, the Washington Post reported. He spoke in prisons with large Latino minorities and visited community churches to present himself as a candidate with traditional Christian values.

“Many Americans with a Latin American background are very Christian and have very conservative views on societal issues such as abortion,” Schor explained.

Trump also succeeded in “convincing some of these voters that Joe Biden was a candidate for socialism, an ideology that many of these immigrants, including those from Venezuela under Maduro, tried to escape when they came to the United States,” Johnson noted.

Trump may have boasted of pursuing an uncompromising foreign policy toward Venezuela and, more generally, other left-wing Latin American countries, but it was a less important factor in swinging the Latino vote.

The shift among Latin American voters toward the Republican side of politics poses a challenge to Democrats that goes beyond this election.

“There seems to be a transformation within this society, marked by the fact that being Latin American is no longer the dominant factor in the vote, which will force the Democrats to make new efforts to win back this voter,” Schor said.

Republicans, especially the more conservative ones among them, would no doubt welcome this development. “American demography has forced Republicans to do a soul-searching exercise for a while. The growing importance of the Latin American minority means that they have to reconsider their position on issues such as immigration,” Schor explained.

But such questions seem redundant if an open anti-immigrant candidate like Trump can succeed in capturing more votes from this community.

This article was translated from the original in French by Nicole Trian.